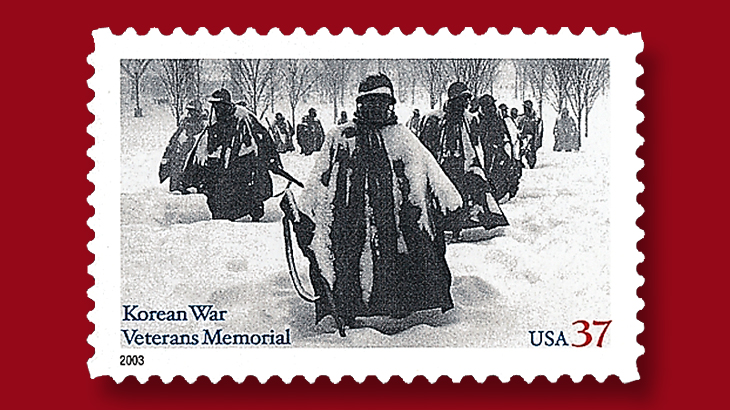 Frank Gaylord, a Vermont sculptor who successfully challenged the United States Postal Service over its unauthorized use of his Korean War Veterans Memorial on a 2003 stamp, died at the home of a daughter on March 21. He was 93.

The former paratrooper and World War II veteran won nearly $685,000 in damages in 2013 over the use of his statues on a commemorative stamp, perhaps the largest payment the Postal Service ever made for stamp art. The 37¢ Korean War Veterans Memorial stamp was issued July 27, 2003 (Scott 3803).

The U.S. Court of Federal Claims agreed with Gaylord’s claim that he never gave the federal government rights to reproduce images of his sculptures of war-weary soldiers fighting in Korea.

Lawyers for the Postal Service fought Gaylord’s claim, arguing that the statutes on the National Mall in Washington were owned by the federal government. As such they contended the Postal Service was free to use them on the stamp.

The courts rejected that claim, siding with Gaylord that he had managed to keep his rights to the statues despite their public location.

The Gaylord court case has been a key component of another lawsuit filed against the Postal Service by a Nevada sculptor who is seeking millions in damages for the unauthorized use of his statue of Lady Liberty on a forever stamp. That case is being heard in the same court that approved Gaylord’s claims.