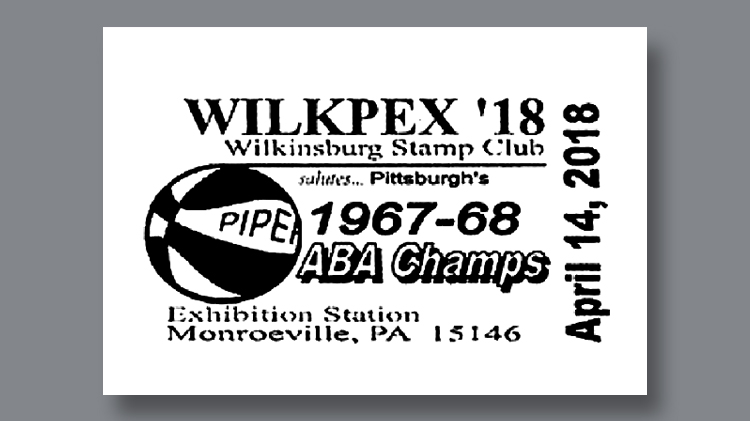 This Wilkpex postmark salutes the 50th anniversary of the first American Basketball Association championship, won by the Pittsburgh Pipers.

The first championship of the American Basketball Association (ABA) is being celebrated 50 years later on a pictorial postmark sponsored by the Wilkinsburg Stamp Club.

The cancel salutes the Pittsburgh Pipers, who defeated the New Orleans Buccaneers 122-113 on May 4, 1968, in the seventh and deciding game of the series.

Not only were the Pipers the first ABA championship team, but they remain the city’s only professional basketball champion.

The ABA was a professional men’s basketball league formed with 11 teams in 1967 as an alternative to the National Basketball Association (NBA). The ABA is where many prominent players began their professional careers, including Julius “Dr. J” Erving and Moses Malone.

According to History.com, the ABA was popular in its teams’ 11 cities but wasn’t able to reach a larger audience and thereby make enough money to survive.

The ABA merged with the NBA during the 1976 off-season, and four teams moved over to the older league: the New York Nets, Denver Nuggets, Indiana Pacers and San Antonio Spurs.

Cornelius “Connie” Hawkins was named most valuable player of the ABA playoffs in 1967-68, the season celebrated on this postmark. Hawkins went on to play in the NBA and with the Harlem Globetrotters, and was inducted into the Naismith Basketball Hall of Fame in 1992.

Hawkins made a guest appearance on the second-ever episode of Saturday Night Live in October 1975, in a comedy skit where the 6-foot-8-inch basketballer challenged 5-foot-3-inch singer-songwriter Paul Simon to a game of one-on-one.

Christmas postmarks abound, with celebrations from all around the country