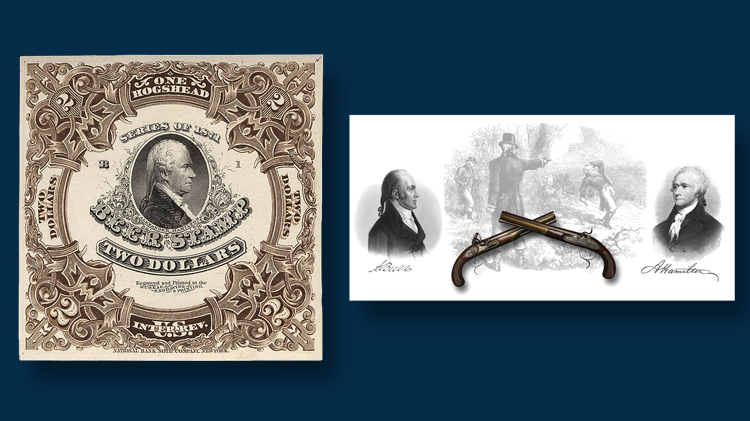 Images of Aaron Burr and Alexander Hamilton flank the scene of the infamous duel that took place in 1804 between the two men. The pistols used in the duel, also shown, will be on display May 25-June 24 at the Smithsonian’s National Postal Museum to help k

The Smithsonian’s National Postal Museum on May 25 will open a new exhibit “Alexander Hamilton: Soldier, Secretary, Icon” that will run through March 3, 2019.

For a brief four-week period, the exhibit will include the original dueling pistols used by Hamilton and Aaron Burr in the 1804 duel that resulted in Hamilton’s death.

The display of the pistols, courtesy of the JPMorgan Chase & Co., will take place May 25 through June 24. It is the first time the pistols will be on public display in the Washington, D.C., area.

The exhibition coincides with the Washington, D.C., touring dates of Hamilton: An American Musical.

According to the postal museum, the exhibit “explores the extraordinary life of Alexander Hamilton (1755-1804) through original mail sent and signed by him in his role as first Secretary of the Treasury and portraits of him and his contemporaries on postage and revenue stamps.”

One of the items included in the exhibit is an 1871 United States $2 Beer revenue stamp proof that includes a portrait of Hamilton (Scott REA29).

Hamilton was born Jan. 11 in 1755 (or 1777) on the island of Nevis in the Caribbean. As a young man, he attended King’s College (now known as Columbia University) in New York City.

“Shortly after his arrival in New York, long-simmering tensions between Great Britain and her North American colonies erupted into open war,” the National Postal Museum said. “Essentially an orphan, and with few influential connections, Hamilton saw the American Revolution as an opportunity for rapid social advancement. Hamilton committed to the revolution; he and America would sink or swim together.”

His alma mater highlighted his many accomplishments: “Hamilton was one of the founding fathers of the nation. He joined James Madison and John Jay in writing The Federalist Papers, essays considered the defining discourse on American government. As the nation’s first secretary of the treasury, he laid the groundwork for the American economic system. An advocate of a strong central government, he promoted pro-business policies that spurred the growth of New York as a financial center. He helped found the Bank of New York and the New York Evening Post. He was throughout his life opposed to slavery and openly scornful of those who defended ‘the peculiar institution.’ ”