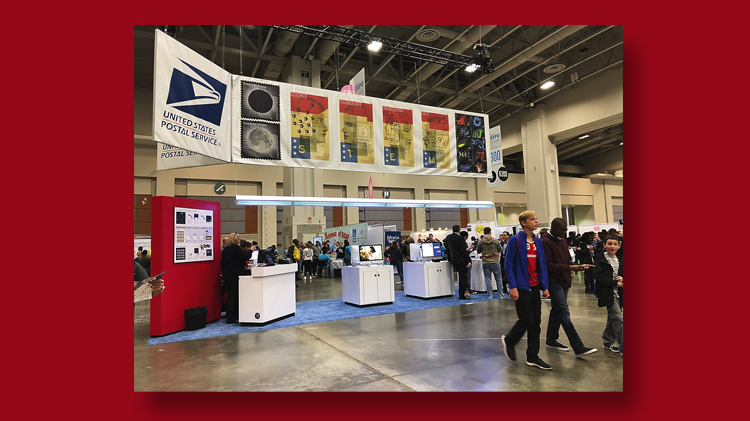 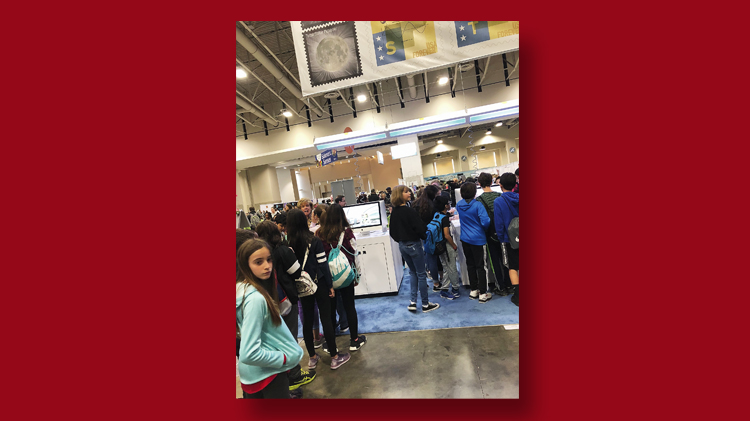 Students waiting at the Postal Service booth to try out the interactive virtual stamp gallery experience.
Previous
Next

The United States Postal Service went all out in an attempt to reach a new audience in conjunction with a recent first-day ceremony.

The Postal Service’s booth at the USA Science and Engineering Festival in Washington, D.C., held April 7-8 with a preview day April 6, used an open-concept layout with six computer stations, a retail booth and a cancellations table.

A large banner featured the four STEM Education forever stamps that were issued April 6 at the festival. The 2017 Total Solar Eclipse forever stamp and the 10 Bioluminescent Life forever stamps issued Feb. 22 this year also were highlighted.

A big hit at the Postal Service booth was the virtual reality stamp gallery that allowed visitors to interact with subjects related to recent stamp issues.

Two other computer stations highlighted the Postal Service’s Informed Delivery service, which allows you to preview your mail by using email. The emails show grayscale images of inbound letter-sized mailpieces heading to your address. Customers could sign up for the service at the computer stations.

According to the Postal Service, more than 8 million people have signed up for this service as of early April.

For more information on the Informed Delivery service, visit the website.

Unlike most first-day ceremonies that only have a retail presence for that day, the Postal Service booth remained open the main two days of the festival, April 7-8.

I was at the festival on the April 6 preview day; it was crowded with lots of young students. Reportedly, the next two days were even busier, which provided the perfect audience for the Postal Service to reach with its booth. I’m certain that being located close to the NASA area was a plus, too.