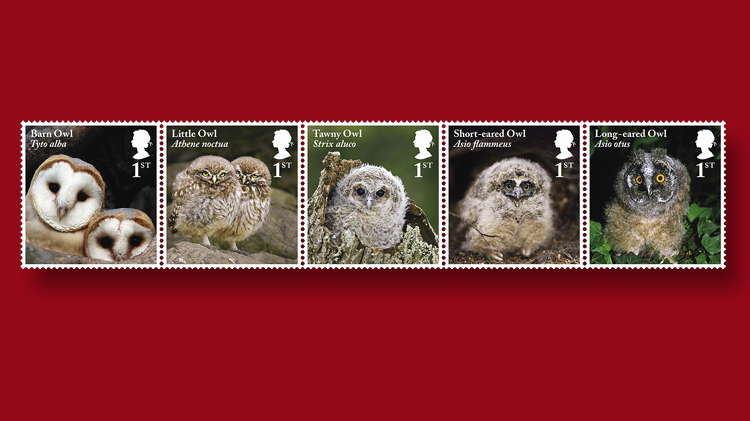 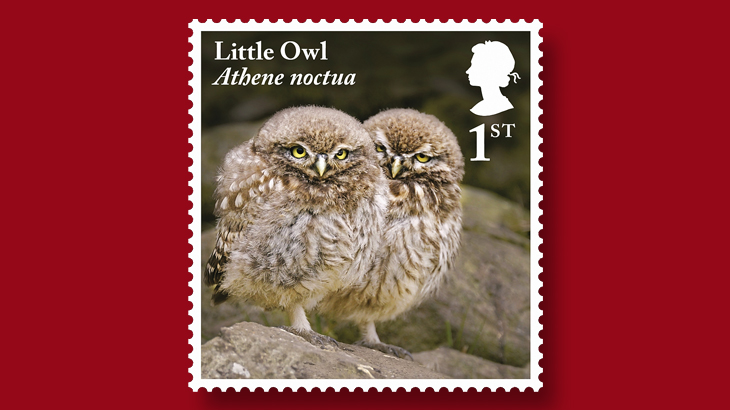 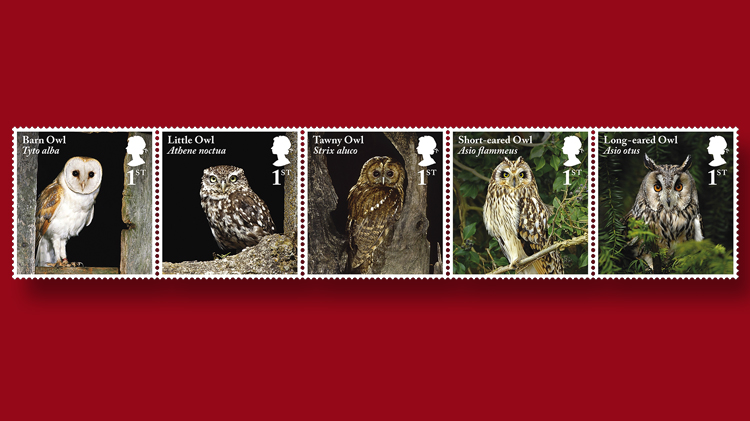 The five species of owls are pictured in the same order on the strip of stamps featuring photographs of adult owls.
Previous
Next

Great Britain’s Royal Mail is depicting five species of owls on 10 stamps being issued May 11.

Royal Mail spokesperson Philip Parker said, “Owls are among our most iconic bird species, with their soundless flight and eerie calls, and our new stamps celebrate their beauty.”

The 10 different designs are being offered in two strips of five se-tenant (side-by-side) stamps each. One strip features photographs of juvenile owls, or owlets, and the other shows adult owls.

All the stamps are nondenominated, paying the first-class rate (currently 67 pence). Each stamp includes “1st” under the silhouette of Queen Elizabeth II in the upper right of the design.

The first stamp in each strip features one of the most familiar owls in Great Britain, the barn owl (Tyto alba).

The Cumbria Wildlife Trust describes this bird of prey as “ghostly white below, mottled silver-grey and buff above with a heart-shaped, white face and black eyes.”

Barn owls nest in holes in trees, barns and other manmade structures and caves. The adult shown on the stamp appears to be in a barn, while the pair of owlets on the other stamp look like they are in a hole in a tree.

According to Royal Mail, barn owls became rare following widespread use of the insecticide DDT in the 20th century, but their numbers are now recovering.

Little owls (Athene noctua) are pictured on the second stamps in the two strips of the new issue. They received their common name for their diminutive size; they are about 8.5 inches long, weigh a little more than 6 ounces and have a wingspan of 22 inches.

Not native to Great Britain, the little owl was introduced there in the 19th century and now is widely found across southern Britain.

The national bird of Greece, the little owl also symbolizes Athena, the Greek goddess of wisdom.

The third stamp in each strip pictures Britain’s most common owl, the tawny owl (Strix aluco). However, because of its strictly nocturnal nature, it is more often heard, with its tu-whit tu-whoo call, than seen.

The two owls also have different colored eyes: yellow for the short-eared and orange for the long-eared.

Unlike the tawny owl, the short-eared owl is often active during the day. This owl is found on all the continents, except for Australia and Antarctica.

In its online field guide to North American birds, the National Audubon Society said of the short-eared owl, “When hunting it flies low over the fields, with buoyant, floppy wingbeats, looking rather like a giant moth.”

In the Sept. 30, 2017, article on the website of the magazine Country Life (gamekeeper Simon Lester described the long-eared owl: “Definitely the wisest looking owl, thanks to its upright stance, ear tufts and authoritative, staring orange eyes, this nocturnal and most secretive of owls often roosts communally in dense cover. Adults give their presence away with a soft, elongated hooo and young birds make a noise like a creaking gate. They like to nest in an old crow’s nest or redundant squirrel drey in their preferred coniferous woodland. There are about 3,500 pairs; numbers are boosted in winter by migrants from Europe.”

Atelier Works designed the Owls stamps, using photographs from different sources. The stamps measure 35 millimeters by 37mm each, and are perforated gauge 14.5 by 14.

International Security Printers printed them by offset in sheets of 50, sold in panes of 25 at most postal outlets.

Royal Mail’s other products for the Owls issue include first-day covers, 10 postcards reproducing the designs of the stamps, and a presentation pack with mint examples of the stamps and information about owls.