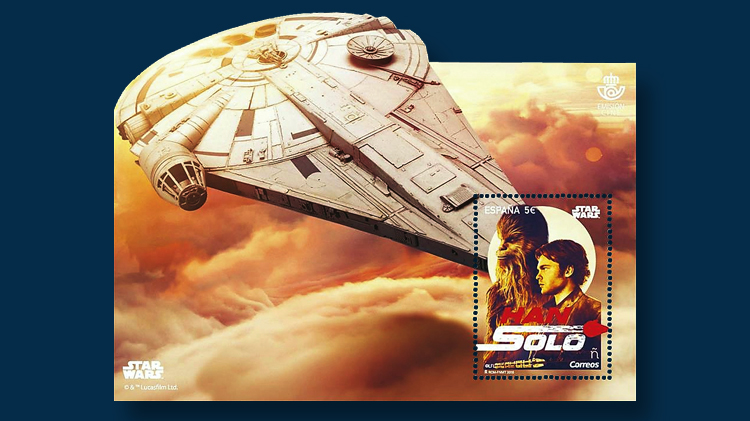 The new sheets are part of an ongoing Cinema series. They were issued April 13, more than a month ahead of the film’s scheduled premiere May 15 at the Cannes Film Festival in France and the May 25 opening in theaters in Spain, the United States and many other countries.

The film is a prequel, telling the story of Star Wars character Han Solo.

The website of Star Wars films, describes the plot: “Board the Millennium Falcon and journey to a galaxy far, far away in Solo: A Star Wars Story, an all-new adventure with the most beloved scoundrel in the galaxy. Through a series of daring escapades deep within a dark and dangerous criminal underworld, Han Solo meets his mighty future copilot Chewbacca and encounters the notorious gambler Lando Calrissian, in a journey that will set the course of one of the Star Wars saga’s most unlikely heroes.”

Both souvenir sheets include a single 5 stamp that pictures Ehrenreich. On one stamp, he is shown with Chewbacca, the Wookie warrior who is the co-pilot of the Millennium Falcon.

That fictional spaceship is the real star of Spain’s new souvenir sheets. Not only is it pictured in the selvage of the sheets, but they are cut to shape around it at the top.

The sheet with the Han Solo and Chewbacca stamp features a sketch of the Millennium Falcon with various of its parts pointed out. The other sheet depicts the spaceship in flight.

Spain’s Correos (post office) reports that the souvenir sheets were printed by offset combined with lenticular technology that provides a 3D effect.

Spain used a similar type of printing on its 2017 souvenir sheet marking the 40th anniversary of Star Wars films (Scott 4206).