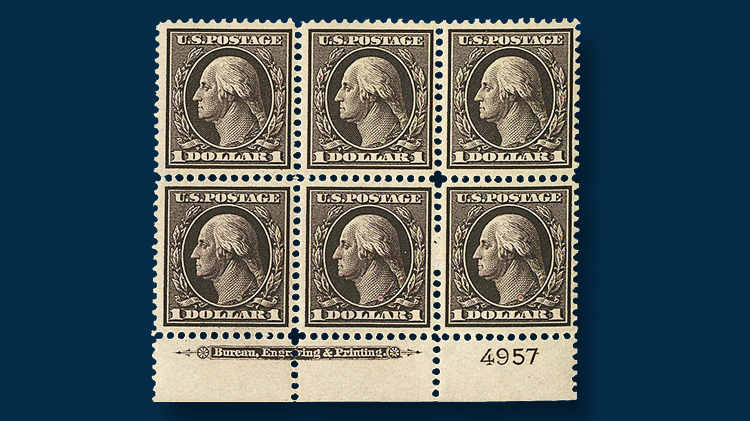 The April 30-May 1 Spink USA auction features numerous plate blocks of classic U.S. stamps, such as the 1909 $1 violet brown George Washington plate block of six with Bureau of Engraving and Printing margin imprint and plate No. 4957. 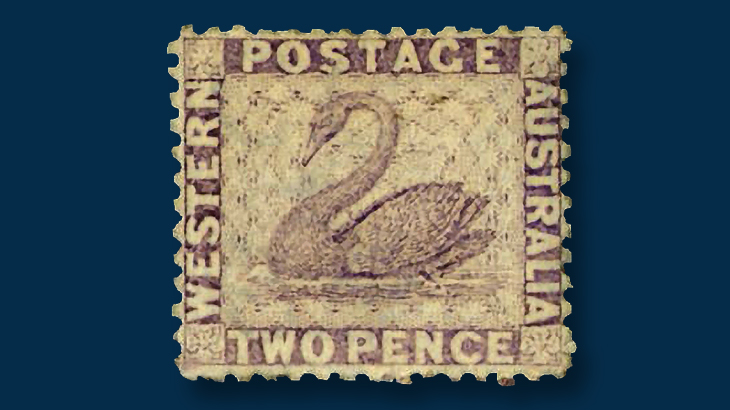 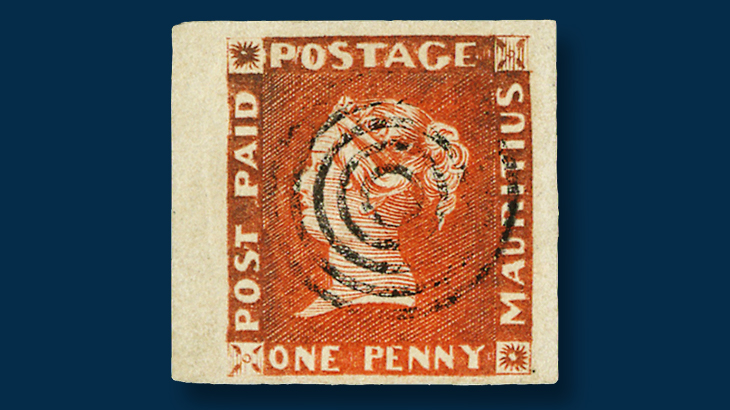 One of three used 1848 Queen Victoria stamps from Mauritius that will be offered during the April 30-May 1 Spink USA auction in New York.
Previous
Next

Spink USA will hold its next Philatelic Collectors’ series sale on Monday, April 30, and Tuesday, May 1, at the Spink office in New York City.

The auction will include United States, Canada, British Commonwealth and worldwide stamps, proofs, postal history and more, with some collections and large lots as well.

Used and unused classic stamps are offered as singles, and an extensive selection of U.S. plate blocks begins with a block of 10 of the 1881 1¢ gray blue Benjamin Franklin (Scott 206) with bottom margin imprint and plate No. 529.

Some of the U.S. plate blocks in this auction are significant rarities, such as the 1909 $1 violet brown George Washington, configured as a plate block of six with Bureau of Engraving and Printing margin imprint and plate No. 4957.

“A mere seven plate blocks are believed to exist,” Spink points out, and this one is described as remarkably well centered, with stunning intense color and sharp impression. Two of the stamps are never hinged.

The $1 plate block of six is listed by Spink with the $22,500 value for the unused plate block found in the 2018 Scott Specialized Catalogue of United States Stamps and Covers. In the Scott catalog, that value appears in italics to indicate an item that can be difficult to value accurately.

Two stamps with inverted centers from the U.S. 1869 pictorials issue are included in this auction: the 15¢ brown and blue type II (Scott 119b) and the 24¢ green and violet (120b). Both inverts have been used and postmarked.

The Rodgers stamp is “cut close as always, affixed sideways to the top left portion of the address side of about a third of official flight post card with inset photo of Rodgers, small tear at top left, otherwise fine and very rare.” Just 12 examples of this stamp are recorded, Spink notes.

The British North America lots feature many proofs and specimens of classic Canada, along with a substantial number of issued stamps and varieties. Two unused examples of the 1855 10-penny blue Jacques Cartier stamp (Scott 7), one with “full clean original gum,” will be auctioned; both are ex-Sir Gawaine Baillie and carry a Scott catalog value of $12,000 each.

Three used stamps of Mauritius represent the 1848 Queen Victoria issue, in the form of the 1-penny orange vermilion (Scott 3, with two examples of the earliest impression) and the 2d blue on “greyish blue” paper, also an early impression (6).

The first of the two 1d stamps is from position 4, described as having “an intense color, very large margins for the most part with probably a sheet margin at left, delightfully cancelled by target type neatly struck in center, an absolutely superb used example of this classic imperforate rarity.” With a Scott catalog value of $18,000 in italics, Spink has listed this stamp with an estimate of $15,000 to $20,000.

Well into the Tuesday afternoon session, Spink offers what it describes as one of the premier exhibition pieces of Australian States philately, an unused Western Australia 1879 2-penny mauve Swan error of color without gum (Scott 31a). Scott describes the color variety as lilac; the normal issued stamp is yellow.