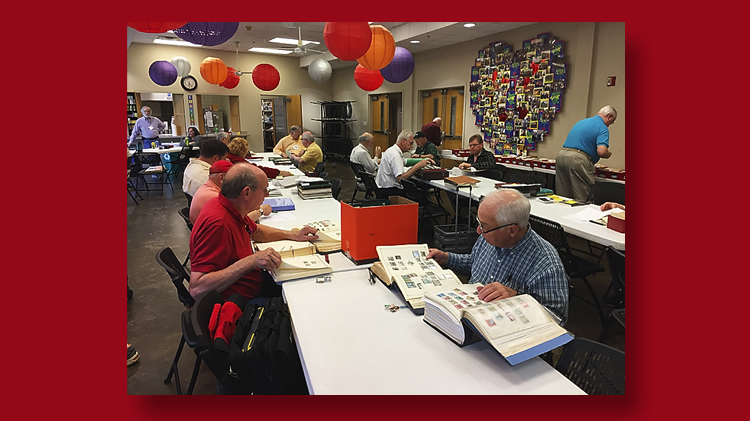 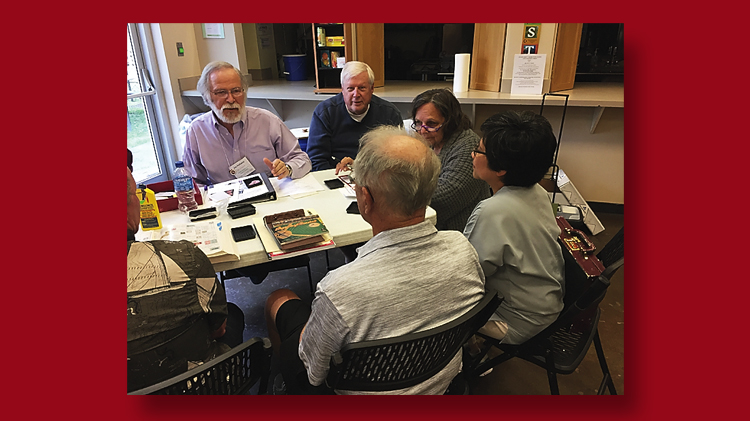 Knoxville Philatelic Society member Jim Pettway teaches a workshop on how to check for watermarks. Photo courtesy of Tom Broadhead.
Previous
Next

Creativity with stamp club activities is a key component to engaging collectors that attend meetings regularly.

I received a number of suggestions in response to my Philatelic Foreword column in the April 9 Linn’s seeking input on activities for stamp club meeting.

The Knoxville Philatelic Society in Tennessee shared photos and details of its meetings.

“Monthly meetings are preceded by a 30 minute workshop on a practical aspect of philately,” said Tom Broadhead of the club. “Previous workshops have dealt with mounts and measuring perforations.”

Shown nearby is club member Jim Pettway teaching a workshop on how to check for watermarks.

A real standout for me is that the Knoxville Philatelic Society has a committee to purchase collections, break them down, and then sell the items to club members. The proceeds are pumped back into the club to buy more items.

Shopping takes place before and after the meetings.

Similarly, Ron Breznay of the Wyoming Valley Stamp Club in Wilkes-Barre, Pa., reported that the club has a “nickel box night.” Before the night, the club purchases mixtures or receives them as donations, and then at the meeting, members peruse the stamps for additions to their collections, paying 5¢ to the club for each stamp kept.

Acquisition of philatelic material continued as a theme. Mike Kleintank, president of the Greater Cincinnati Philatelic Society, shared that it has a mini auction as a part of every meeting.

“If we did not have that, there would not be a good attendance,” he said.

Sessions with buying, selling and trading were mentioned by several collectors. These sessions serve as a way for members to move some of their own material to fellow collectors in the club.

Some clubs even invite stamp dealers to set up and sell wares at the meetings.

Use of the American Philatelic Society’s circuit sales program and its slide show program were mentioned, too.

Holiday parties and summer picnics, while less likely to have a strong philatelic slant, are popular events.

While finding a presenter or speaker for a meeting can prove challenging, a show- and-tell session by members offers a good alternative.

Dale Niebuhr of the Lincoln Stamp Club reported that sometimes the show-and-tell has a theme.

“One month the theme was the color blue and members brought stamps that were blue, covers that were mostly blue, or albums/catalogues with blue covers,” he said. “Each person talks about the item they brought for a minute or two and then passes it around the room.”

Related to a theme night, Dennis Callison of the Dayton Stamp Club shared the following: “One time we had the topic ‘My Favorite Green Stamp’ as the meeting was on St. Patrick’s Day. Another topic was ‘My Favorite Patriotic’ when the meeting was the day after the 4th of July.”

A club newsletter or email to members serves as a great way of keeping members informed about upcoming events.

Some clubs also host a stamp show once a year, and others also organize bus trips to attend larger shows. The latter helps members save on travel expenses.

Exhibiting also was mentioned more than once as a club meeting activity. Some clubs put together different displays that are shown in their respective communities.

Paul L. Morton, secretary of the Rio Rancho Stamp Club in New Mexico, shared that his club does four-page exhibits that are shown during the meetings.

Morton said: “We are a small show and are unable to hold competitive stamp exhibits every other year due to conflicts with our show venue. So on those ‘off years,’ rather than spend an entire year without stamp exhibits, I thought we could present ‘Club Exhibits’ at our monthly stamp club meetings.”

In addition to those collectors already mentioned, I would like to thank the following readers for writing in with suggestions: Nick Nikolaidis of the Upper Valley Stamp Club in Vermont; Larry Huff of the Union River Stamp Club in Ellsworth, Maine; and Ken Aldridge of the Mid-Cities Stamp Club in Arlington, Texas.