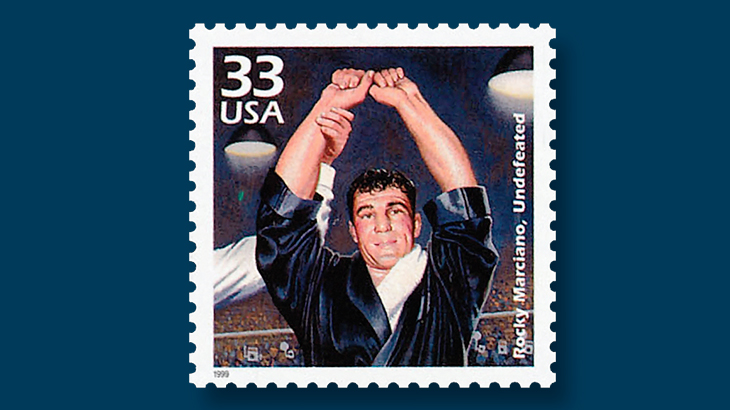 While Red Applegate isn’t on a U.S. stamp, he fought boxer Rocky Marciano in 1951 and lost by decision. Marciano was honored with a stamp in 1999. 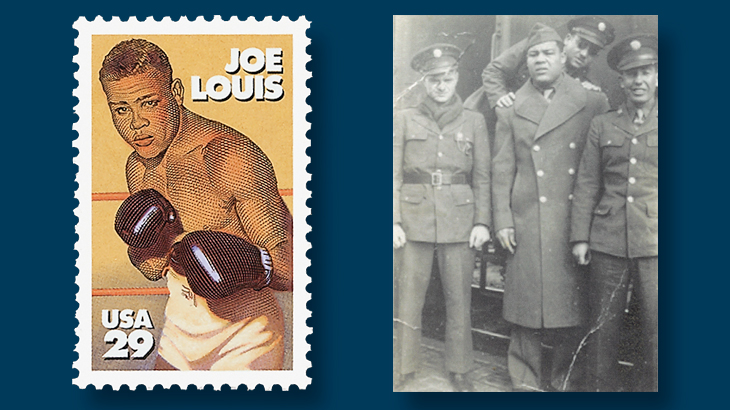 Boxer Joe Louis was commemorated with a United States 29¢ stamp in 1993. According to an inscription on the reverse of this photo, shown from left to right are Alfred “Red” Bigalke, Joe Louis, Russell and Red Applegate. The undated photograph was taken in
Previous
Next

While organizing items in my collection, I came across a family photograph with a philatelic connection of sorts.

This offered the perfect opportunity for me to create a page in my stamp album tying U.S. postage stamps with the photograph. The page also serves as a great conversation piece.

When I first saw the photograph, I immediately recognized boxer Joe Louis (shown in the center in uniform). His commanding presence was unmistakable (plus he is identified on the back of the photograph).

The person shown at left is my grandfather’s older brother, Alfred “Red” Bigalke. He was a lightweight boxer, and also served the United States in the Army during World War II. According to family lore, he sparred with Louis.

The writing on the back of the photograph says it was “taken at Kansas City.” While there isn’t a date reference, Louis joined the Army in 1942. According to the Arlington National Cemetery website, “During the war, Louis fought 97 exhibition matches before more than two million troops.”

Another person is identified in the photograph, on the reverse, as “Red Applegate.” I wonder if it could be boxer Red Applegate, who fought the famous undefeated boxer Rocky Marciano in 1951? Unfortunately, I couldn’t find any wartime photos of him online to verify this information.

With these details at hand, a simple album page seemed fitting.

I decided to display the photograph with the United States 29¢ Joe Louis commemorative (Scott 2766) and the 32¢ Rocky Marciano stamp (3187k) from the Celebrate the Century pane of stamps paying tribute to the 1950s.

If you have a similar story to share about tying family photographs with stamps in your album, send me a note with images by email or write me care of Linn’s Stamp News, Box 4129, Sidney, OH 45365. I may share some of the stories in a future issue.