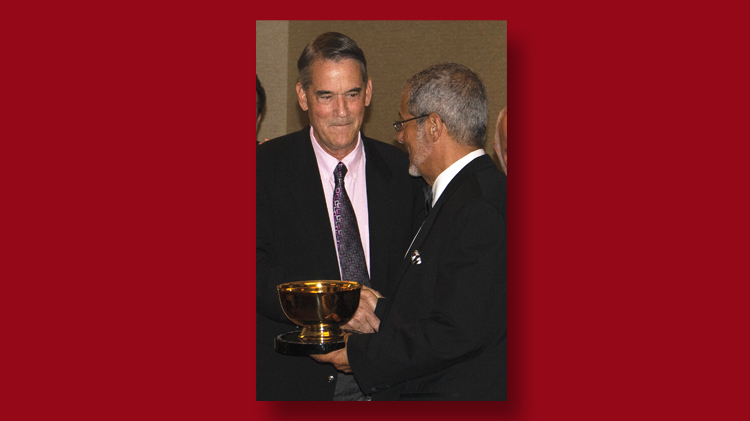 In the photograph above, former APS president Wade Saadi (right) presents the Champion of Champions award to Allen (left) for his exhibit “The First United States 12¢ Stamp Series of 1851–1861.”

“These stamps, the highest denominated U.S. postage stamp of its time, played critically important roles for larger transcontinental, commercial and legal mails and were the workhouse for all international mails,” according to the title page of his exhibit.

“The exhibit includes the entire lifecycle of the stamps, including pre and post production material, the plate making and printing process for the two recorded plates, and the role the stamps played during a period when rates, routes and conveyance methods were rapidly evolving all over the world.”

Allen’s exhibit was one of the 26 grand-award winners of APS-certified national exhibitions held from July 1, 2017, through June 30, 2018, competing for the annual top honor.

His exhibit was chosen in March as the grand-award winner at the St. Louis Stamp Expo show in St. Louis, Mo.

An interesting twist on standard protocol resulted in an entertaining moment for the announcement of the Champion of Champions winner at the awards banquet on Saturday evening.

Typically, the APS president announces the winner of the Champion of Champions award. However new APS president Robert Ziegler had a prior commitment, so a fundraising raffle was held to allow others to perform three of his specific duties: presenting 50-year awards to APS members, presenting the Champion of Champions award, and announcing that award.

Allen won the opportunity to announce the Champion of Champions winner. While performing that duty at the awards banquet, he paused for just a couple of seconds when he realized he was reading the title of his own exhibit.

Saadi, who has presented a number of the championship awards in previous years, ended up serving in that same role because he won that experience in the raffle.

The APS Stampshow 2018 awards banquet was held Aug. 11 at the Crown Plaza downtown hotel, adjacent to the Greater Columbus Convention Center, where the competing championship exhibits were displayed.