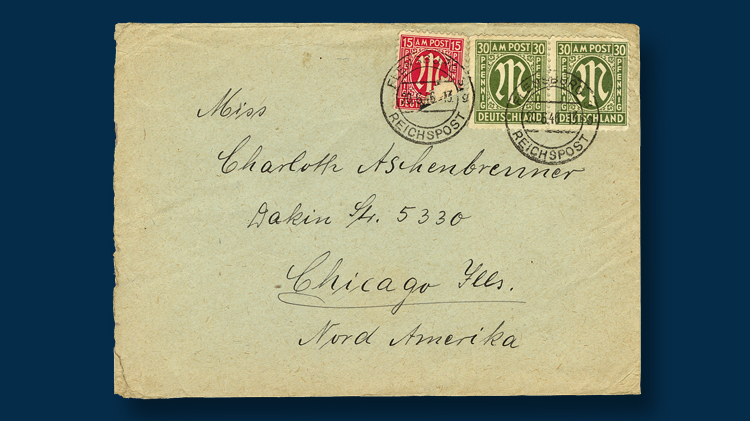 Figure 2. In violation of denazification policies, this cover franked with three Allied Military Government stamps for Germany was canceled with an old circular datestamp with the word “Reichspost” still in evidence. 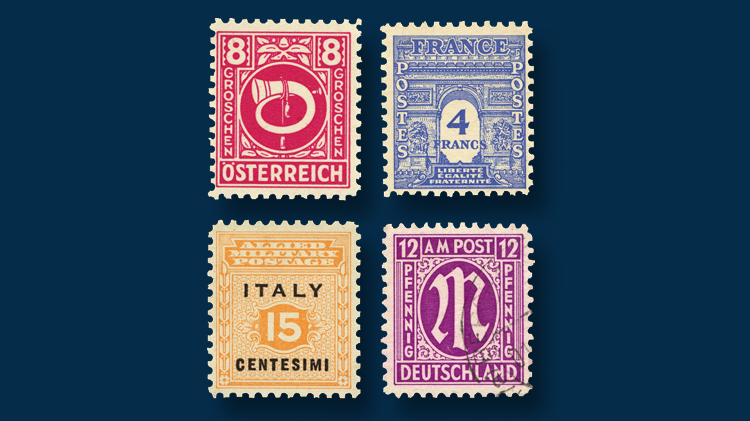 Figure 1. These stamps were produced by the U.S. Bureau of Engraving and Printing for use in Austria, France, Italy and Germany, after their liberation from Nazi rule.
Previous
Next

United States stamp collectors can easily miss a fascinating byway of the output of the Bureau of Engraving and Printing, the government printer that produced almost all U.S. stamps issued from 1894 to 2003.

I am referring to stamps designed and produced by the BEP during 1943-45 for use in Allied-occupied Europe. Figure 1 shows examples of the stamps that were distributed in Austria, France and Italy for civilian correspondence as the German military was driven out of these countries.

Also, in 1945, AMG stamps were issued for use in the U.S. and British zones of occupied Germany. The number of stamps needed for Germany exceeded expectations, so additional printings using the same design were done in England and in Brunswick, Germany.

Stamps from all four areas are easily found today. Virtually all of the mint examples catalog under a dollar. Only a few used high values are difficult to find.

However, beyond the basic stamps, there are color varieties, perforation varieties, paper varieties, interesting marginal markings, and plate and seemingly random design varieties. This makes these stamps great fun to track down and collect.

One reason it is easy for U.S. collectors to miss these AMG stamps is that they are not listed in the Scott Specialized Catalogue of United States Stamps and Covers. Scott editors listed them there in 1948 but dropped them in 1949, listing them henceforth with the stamps of the countries of intended use.

Nevertheless, there is a thriving specialty society, the Allied Military Government Collectors’ Club, formed in 2012. Its members collect and study the stamps and postal history of these four areas, and the AMG issues of Trieste, the Ryukyu Islands and Korea.

The club publishes a quarterly journal, A.M.G. Courier, under the capable editorship of Richard Pederson. An important resource for AMG collectors, the journal is a gateway to the surprisingly wide work of other print resources and the many specialized areas that are included in AMG collecting, such as revenues, travel permits stamps, and the Bari Wolf issues of Italy.

I have a soft spot for the issues for Germany and their uses on cover. An example from 1946 is shown in Figure 2. Franked with three stamps totaling 75 pfennigs, the cover is notable for the postmark.

An important focus of the Allied authorities’ administration of German territory was the so-called “denazification” program.

This program included the elimination of references to Hitler’s Third Reich and extended to banning the use of the word “Reichspost” in cancellations.

On May 4, 1945, the British military occupation authorities put out a notice intended to aid in the resumption of postal services. The notice stated that old circular canceling devices could continue to be used so long as the word “Reichspost” was removed.

In some cases, the order seems to have been ignored, either willfully or in error.

The cover in Figure 2 was canceled on June 20, 1946, in Flensburg, the third largest town in Schleswig-Holstein.

While use of cancels with “Reichspost” was not a common event, this cover illustrates the sort of things collectors can look for. Others include mixed usages of the different printings, stamp varieties on cover, and covers addressed abroad with unusual rates.

For more information on the Allied Military Government Collectors’ Club, visit its website. As a director of the club, I will also be happy to send a membership application if you contact me via email.