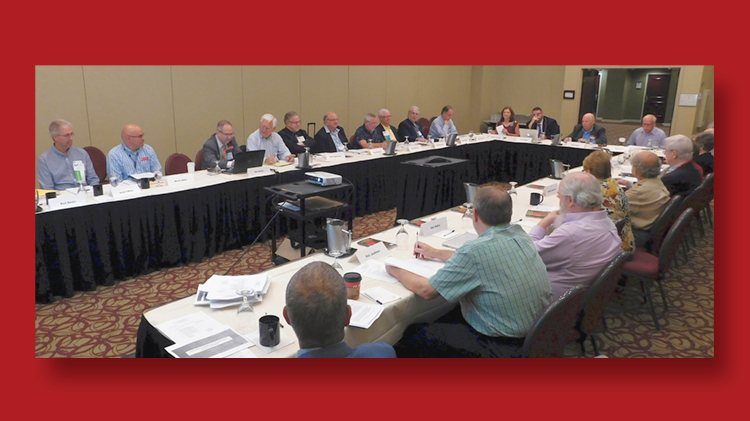 That was the message from APS executive director Scott English as he addressed the directors of both organizations in a joint board meeting held Aug. 8 in Columbus, Ohio.

The meeting took place the day before the annual four-day APS Stampshow opened at the Greater Columbus Convention Center. The show is running jointly with the annual show of the American Topical Association.

During the course of the daylong meeting, the APS and APRL directors unanimously voted to approve Sacramento, Calif., as the location for the 2022 APS Stampshow, and they heard an encouraging financial report from APS treasurer Bruce Marsden and APRL treasurer Ken Nilsestuen.

For the six-month period that ended June 30, the combined APS/APRL unrestricted net assets are up $64,000, with total net assets up $44,000, and external debt now below $4 million, Marsden said.

The treasurers told the boards that the organization is financially strong, and recommended pursuing what they characterized as an opportunity to accelerate bank debt repayment.

Scott Tiffney, librarian and APRL director of information services, described recent advancements such as making material available digitally on the APRL website, including archives of the society’s monthly journal, The American Philatelist. Tiffney also is streamlining the process for categorizing and utilizing donations to the library.

Martin Miller, editor of The American Philatelist, reported 3,562 responses to a recent survey about the magazine. After covering specifics of the survey in detail, Miller reported the conclusion that the magazine performs well and that major course corrections are unnecessary and unwise.

In his executive director’s report in the morning session, English revealed that the ATA will again join the APS for next year’s summer show that will take place Aug. 1-4, 2019, in Omaha, Neb., and that the American First Day Cover Society is partnering with the APS for the summer show in Hartford, Conn., Aug. 20-23, 2020.

“Our strength is really in the full representation of the hobby, as best we can,” English said.

“If we can put on display the best, the brightest, the most exciting and the most personable people we can, I think that people will come to the hobby much more energetically and enthusiastically,” he added.

English also spoke at length about upcoming changes in the APS website, some of which were to be revealed two days later during the APS general membership meeting.

Miller is managing the ongoing process.

“What you will see starting with Saturday is a substantial change in the way the website is set up,” English said.

Additional changes will be instituted throughout the year, he added.

English provided a “mid-point review” of the 2015 strategic plan approved by the board early in 2016. The key goals of sustainability, education, accessibility and membership were addressed with specific attention to each point.

The society’s membership stands at 28,250, a loss of 703 from the same time in 2017. English told the boards that in his next budget he will request the addition of a staff person “whose sole purpose is focusing on chapters and affiliates, on evangelizing and marketing.”

English compared the combined finances from when the strategic plan was approved in 2015 to today.

Some goals of the strategic plan need to be re-evaluated, and English proposed that a small group of board members review and develop a new plan with APS management.

“Over the past three years, the APS and APRL have substantially improved our financial position,” English concluded.