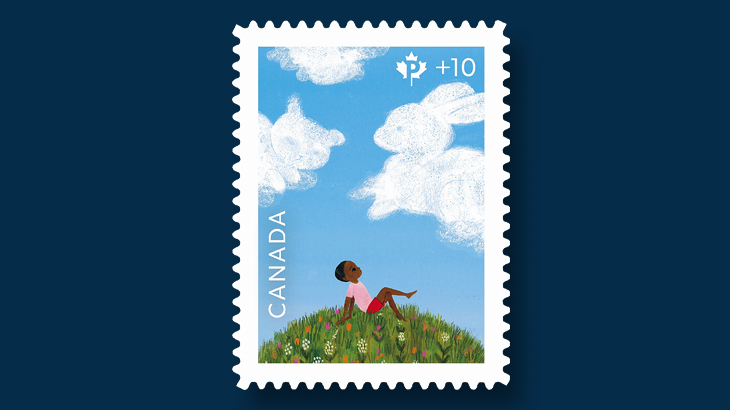 A new fundraising stamp will be added to Canada Post’s Community Foundation series of semipostals Sept. 24.

The self-adhesive nondenominated permanent stamp pays Canada’s basic domestic letter rate, currently 85¢, with a 10¢ surcharge added to support a charity, as indicated on the stamp by “+10” following the “P” symbol representing the permanent rate.

This year’s stamp shows a young child relaxing on a grassy, flowery hill, looking up at a blue sky filled with clouds shaped like animals. The stamp was designed by Matthew Warburton of Emdoubleyu Design and illustrated by Julie Morstad, one of Canada’s top illustrators of children’s books, whose work is honored frequently by the Alcuin Society book design awards.

“Everyone can recall days from their childhood, spending a hot summer afternoon lying in the grass looking up at the clouds rolling by,” Warburton told Canada Post. “This design recreates that feeling of freedom, wonderment and joy with a child sitting on a grassy, flower-speckled hilltop, looking up at the sky and seeing animal shapes in the fluffy clouds.”

As in recent years, a $1 donation from each 10-stamp booklet sold goes to the Canada Post Community Foundation, which funds programs to benefit Canadian children and youth.

According to Details magazine, in 2017 the Canada Post Community Foundation provided $1.1 million in funding to grassroots and community-based child and youth organizations across Canada.

“In the past six years, the foundation has provided more than $6 million to build libraries, create sports and breakfast programs, and ensure access to crisis lines, anti-bullying and mental health initiatives, special needs clinics and life-skills training,” the foundation’s website notes.

“The money has helped promote physical activity and play for children of all abilities and helped at-risk youth gain a better understanding of how education is vital to their future. The Foundation is truly delivering a brighter future for Canadian children and youth.”

Two decades later, Canadian semipostals returned in 1996 with a 45¢+5¢ stamp to support literacy (Scott B13).

A dozen years later, Canada Post began issuing annual stamps with the current “P+10” denomination, beginning with new stamps from 2008 to 2011 for the Canada Post Foundation for Mental Health (Scott B14-B18), followed ever since by stamps supporting the Canada Post Community Foundation (B19-B26).

Also, 7,000 first-day covers will be made available with an Ottawa, Ontario, pictorial first-day cancel showing a smiling sun (item No. 414089131).