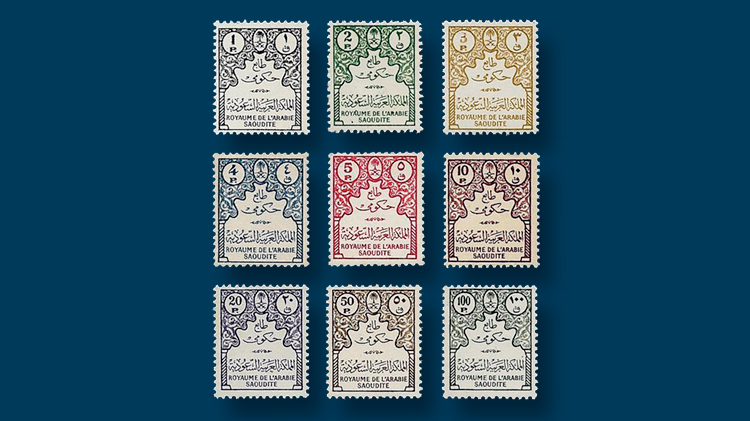 Saudi Arabia’s second set of Official stamps was issued in December 1961 and includes nine denominations ranging from 1 piaster to 100p. These small stamps measure 18.25 millimeters by 22.50mm each.

The Aug. 27 issue of Linn’s Stamp News just landed on the presses and goes in the mail to subscribers Monday, Aug. 13. And if you subscribe to Linn’s digital edition, you’re at the head of the line with early access Saturday, Aug. 11. Here are three previews inside the issue.

Saudi Arabia issued five different sets of Official stamps between 1939 and 1972. Only the Saudi government and royal family members used these stamps. They were used on official correspondence outside the kingdom.

This week, Ghassan Riachi takes a look at the second set of these stamps (Scott O7-015) issued in December 1961.

Top honors went to a Frank Lloyd Wright exhibit at Americover 2018 in Georgia, the annual show and convention of the American First Day Cover Society that recently wrapped. Lloyd de Vries reports on the exhibit as well as the winner of the AFDCS annual cachet contest.

In the Kitchen Table Philately column in each issue of Linn’s, E. Rawolik VI or E. Rawolik VII analyze the content of stamp mixtures offered to collectors. E. Rawolik, of course, is a pseudonym that is “kiloware” (a stamp mixture) spelled backward. This week, E. Rawolik VI reviews a mixture of many interesting stamps, including some surprises. For example, 17 of the 39 sample stamps were related to Halley’s Comet.

Republic of Chad collecting: Inside Linn’s