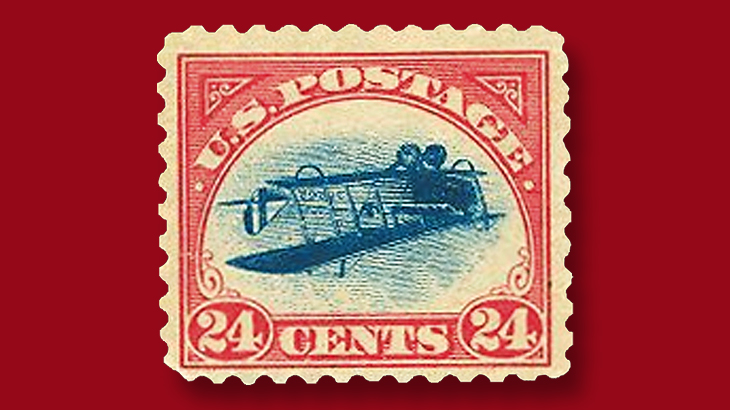 The 1918 Inverted Jenny airmail error stamp that will be on display at the Sescal stamp show in October.

The 74th annual stamp exhibition of Southern California will celebrate the 100th anniversary of airmail in the United States. In conjunction with the theme, one of the 1918 Inverted Jenny airmail error stamps owned by the American Philatelic Research Library will be making an appearance.

Coordinated by the Federated Philatelic Clubs of Southern California, the show is set for Oct. 12-14 at the Ontario Convention Center, 2000 E. Convention Center Way in Ontario, Calif. Show hours are 10 a.m. to 6 p.m. on Friday and Saturday, and 10 a.m. to 4 p.m. on Sunday. Admission is free.

Starting with a viewing on Oct. 11, Schuyler Rumsey will hold a daily auction at the show.

The show features a bourse of dealers selling stamps, covers, supplies and other items of philatelic and postal historical interest. In 2017, there were 34 dealers who attended the show in addition to the United Nations Postal Administration, and about the same number are expected to participate in this year's show.

On Friday night, the Arizona Philatelic Rangers, who actively support the Postal History Foundation in Tucson, will meet for dinner.

The show includes an exhibiting competition and court of honor.

Saturday night there will be an awards banquet and tickets must be purchased in advance.

The show hotel for Sescal, which is adjacent to the convention center, is the Doubletree by Hilton Hotel Ontario Airport, 222 N. Vineyard Ave., Ontario. The show rate is $115 per night and must be booked by Sept. 10. There is a special web link to obtain the show rate. For telephone reservations, give the group code “FPC.”

For more information about Sescal 2018, visit the show website.