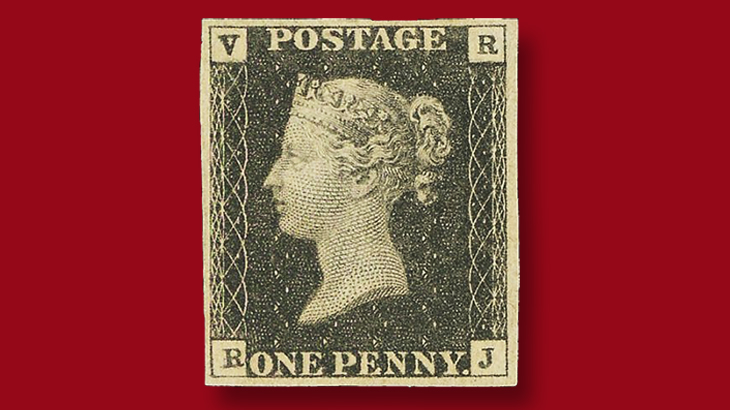 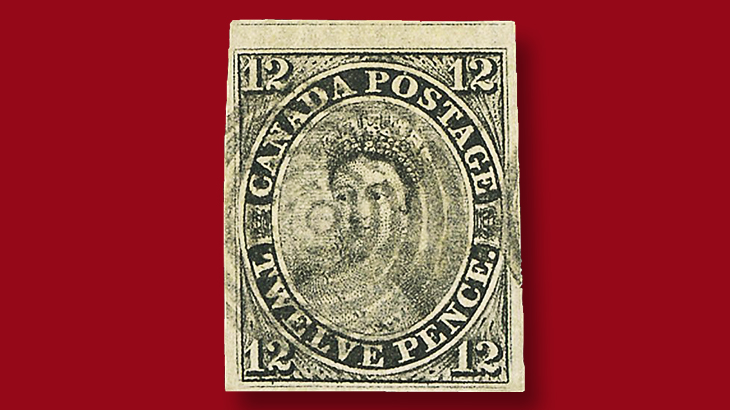 A sound used example of Canada’s 1851 12-penny black Queen Victoria stamp is being offered in the Sept. 12-13 Spink USA auction.
Previous
Next

Two top items from the sale are black Queen Victoria stamps of Great Britain and Canada.

Canada’s 1851 12-penny black Queen Victoria stamp on laid paper (Scott 3) is one of the most coveted issues of the British Commonwealth. The example offered in the Spink USA sale is described as “a magnificent used example of this great classic rarity, being in a condition that only a tiny number of the known used examples can boast.”

Once housed in the legendary collection of American collector Alfred H. Caspary (1877-1955), this particular 12d stamp shows four large margins, including part of the stamp positioned above it on the sheet. It is struck with a target cancel “not obscuring the design as it so often does,” according to Spink USA.

The used 12d black is valued at $135,000 in the 2018 Scott Classic Specialized Catalogue of Stamps and Covers 1840-1940, with the figure in italics to signify that accurately determining the stamp’s value can be a challenge.

Valued at $35,000 in the Scott Classic Specialized catalog (again, with the value in italics), this stamp has four ample-to-large margins and what Spink USA describes as a marvelous overall freshness and strong unblemished color.

The stamp design is based on the 1840 Penny Black (Great Britain Scott 1) but differs by having the letters “V” and “R” positioned in the respective upper corners. The Penny Black shows a Maltese cross in each upper corner instead.

The two-day sale opens at noon on Wednesday with more than 30 mailed U.S. valentines and then moves into U.S. classic stamps and postal history.

U.S. plate blocks in this sale include never-hinged examples from the 1893 Columbian issue, the 1898 Trans-Mississippi Exposition issue, the 1901 Pan American issue and others.

Two of the cherished inverts from the Pan American series are also on offer, both unused with original gum: the 1¢ green and black Steamship stamp (Scott 294a) and the 4¢ deep red brown and black Electric Automobile stamp (296a).

A notorious 1964 error from Falkland Islands is being offered during the Thursday auction sessions.

The stamp comes from a set of four engraved bicolors, each with a portrait of Queen Elizabeth II at upper right and a different black vignette for each of the four denominations.

The 6d blue and black stamp normally shows the armored cruiser HMS Kent, but this example (Scott 151a) instead shows the HMS Glasgow, the vignette prepared for the 2½d stamp from the same set.

Spink USA describes this stamp as a wrong-frame error, citing details of the printing provided by the British stamp catalog firm Stanley Gibbons.

Only some 25 examples of the error are known to have survived, according to Spink USA. The "very lightly hinged" stamp carries an estimate of $10,000 to $15,000.

The auction offers additional material from the David A. Wilson collection of Bahamas, the Alan Meech collection of the Japanese occupation of Burma, the Sandy Campbell collection of Great Britain and British Commonwealth, plus Latin America postal history and more, including collections and large lots.

The catalog for the upcoming Spink USA sale can be downloaded in its entirety as a PDF. The sale also can be viewed online at Stamp Auction Network.