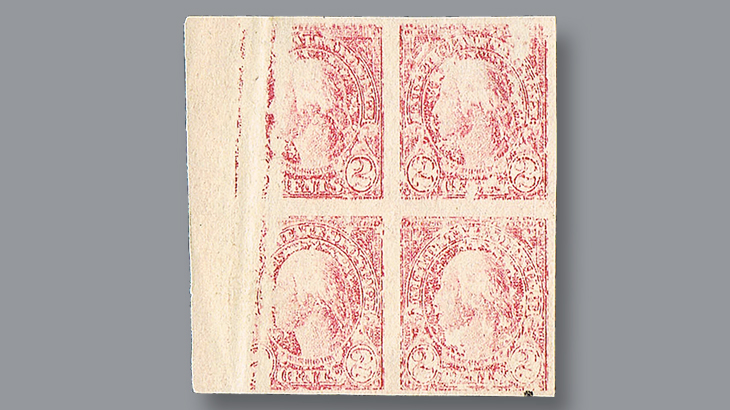 Figure 2. Printer’s waste is often unfinished material excised from the production process. The 2¢ Fourth Bureau issue George Washington block is from material used to dry a plate that was being cleaned. 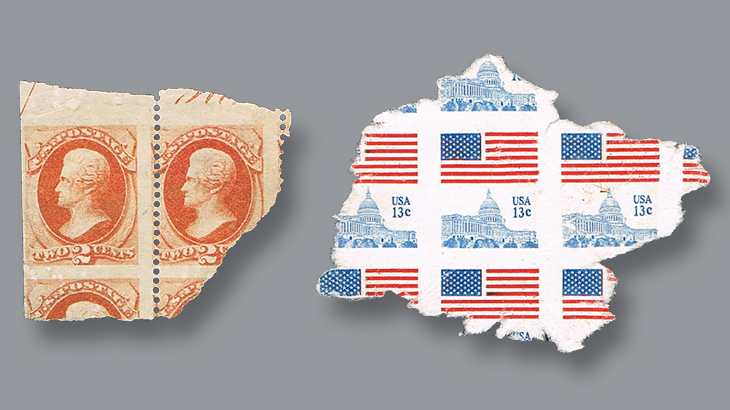 Figure 4. Torn items such as these 2¢ Jackson and 13¢ Flag over Capitol stamp multiples qualify only as printer’s waste. 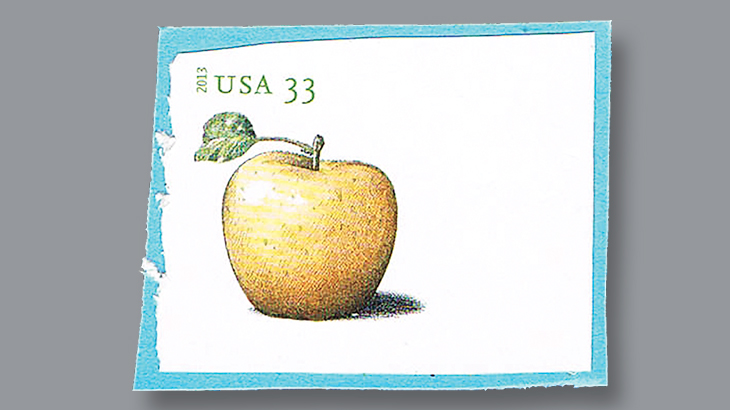 Figure 6. Torn from an imperforate press sheet available to collectors, this 2013 33¢ Golden Delicious Apple stamp imitates printer’s waste, but it doesn’t qualify as such. 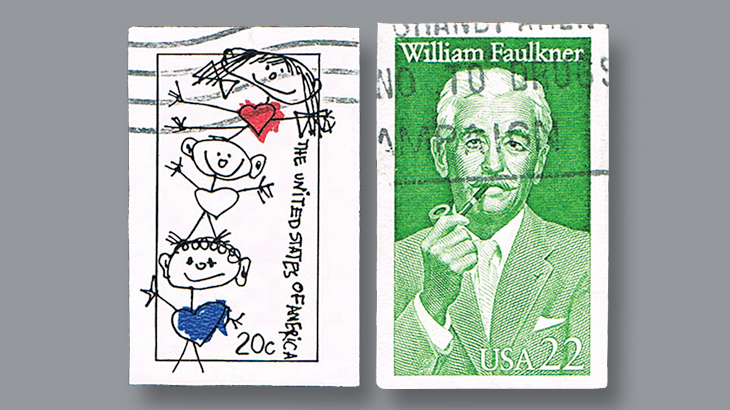 Figure 5. When imperf singles such as these 1984 20¢ Family Unity and 1987 22¢ William Faulkner examples are found, it is a good bet they are from printer’s waste sold to mailers. Neither stamp is known to have been found as mint fully imperf errors. 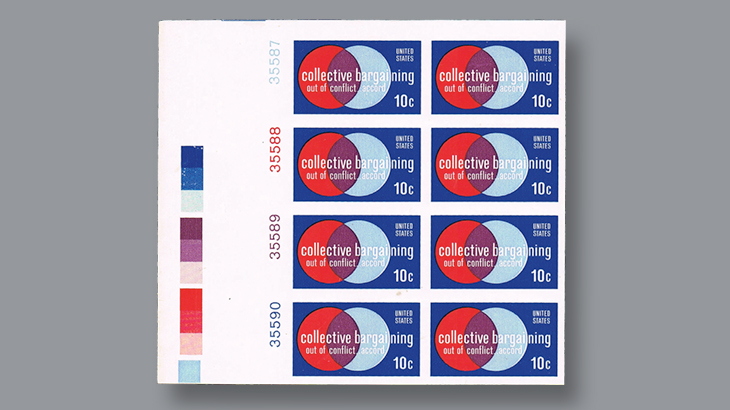 Figure 1. This 1975 10¢ Collective Bargaining plate block looks like it could be an imperforate error, however, it is printer’s waste. A tip-off is the over-wide margin with the complete color blocks, most of which normally would be trimmed off in the pro 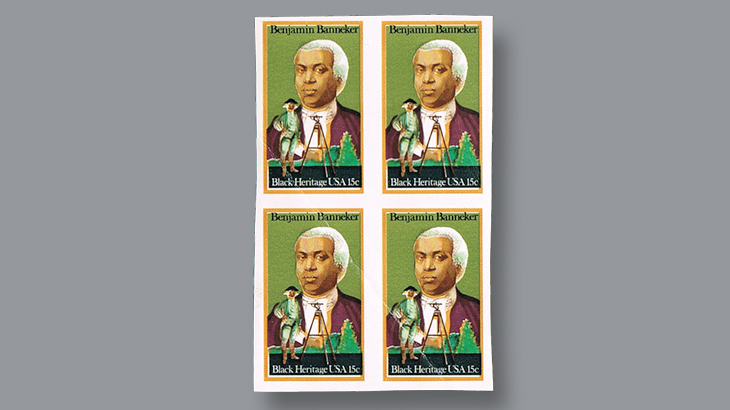 Figure 3. This 1980 15¢ Benjamin Banneker block of four stamps was removed from production because of color misregistration.
Previous
Next

A Linn’s reader recently sent for expertization an imperforate pair of the 1975 10¢ Collective Bargaining commemorative stamp (Scott 1558) fully expecting to receive a good certificate. Instead what he got was a certificate saying that the pair was printer’s waste, not a genuine error.

A plate block of Collective Bargaining imperf waste is shown in Figure 1.

The reader had never heard of printer’s waste and wanted to know what it is. He also wanted to know why, despite having no hint of perforating pins touching the paper, the imperf pair was not an error.

In looking at the term in the broadest sense, all incomplete and/or improperly produced product is technically printer’s waste in that it should be excised from the production process and destroyed. The vast majority of such material is destroyed. Consider how little flawed material gets out compared to the billions of perfect stamps that are produced.

But here we are talking about printer’s waste as a term of art, not in the broad sense, and as such, it has a very specific meaning.

Errors are stamps that reach the end of the production process without being completed (for example, no perforations, one or more colors omitted), or have a major flaw (inverted color, inverted perforations, the wrong watermark, or with a color intended for a different stamp).

Errors should have been identified, excised and destroyed, but instead they made it through the process, were packaged with perfect material, and were sold over a post office counter.

Printer’s waste, on the other hand, is flawed material that was identified for destruction, excised and placed in containers to be destroyed. But instead of being destroyed, it was either stolen by printing plant employees (a rare occurrence) or lifted by outsiders involved in the destruction process, which is usually contracted out.

After the theft occurred, the stolen material was shopped either to stamp collectors, or if available in sufficient quantity, sold and used as postage.

Because of the element of theft and the lack of distribution through a postal outlet, there is a certain smell that attaches itself to such material, and, when it can be proven that it is printer’s waste, many collectors avoid it.

Those who do collect printer’s waste tend to pay less for it than for certifiable errors.

How to identify printer’s waste? There are several ways:

1. Check the Scott Specialized Catalogue of United States Stamps and Covers. When the editors are aware of instances of specific error-like material that is actually printer’s waste, it is mentioned in the catalog.

In the case of the Collective Bargaining pair, the note under the listing in the Scott U.S. Specialized reads, “Imperforates exist from printer’s waste.”

2. Another reference source is the Scott Catalogue of Errors on U.S. Postage Stamps by Stephen R. Datz (16th Edition). This catalog includes a six-page section picturing more than 30 examples that are known to be printer’s waste.

3. Some printer’s waste is obvious because it is incomplete or improperly printed from a given point on, such as an omitted color that also has no tagging and no perforations.

4. Material is at best suspect if it is crinkled, folded, torn apart roughly, has obvious fingerprints, is ungummed, and/or has excess marginal paper or gutter between stamps that should not have it. Two examples are shown in Figure 4: the 2¢ Jackson and the 1977 13¢ Flag over Capitol multiples.

5. Some thefts have become public knowledge because of criminal charges and court cases.

6. In the few instances when only used clearly imperforate singles are known, it can reasonably be inferred that they are printer’s waste. Figure 5 depicts 1984 20¢ Family Unity and 1987 22¢ William Faulkner stamps that are examples of this.

We’re not out of the woods yet when it comes to error look-alikes. There are two more to mention.

First, there have been instances in which proof material has gotten out to the public — usually from private sector contract printers. Because it is almost always imperforate, it can mimic errors.

It also is identified in the Scott U.S. Specialized catalog, and the Datz catalog has a 15-page section under the heading “Error-like Imperforates.” Perhaps I will take a look at some of that material in a future column.

Finally, there is another problem of more recent vintage. My friend Steve Schumann recently came across the imperforate 33¢ Golden Delicious Apple stamp that is shown in Figure 6. This stamp is part of a block of four issued in 2013 (Scott 4727-4730).

This example fits a couple of the criteria for printer’s waste, and that was my initial assessment. But consulting the Scott U.S. Specialized, I found the following note below the listing for this block, “Die cut and imperforate uncut press sheets of Nos. 4727-4730 were made available for sale.”

Thus what we actually have is a single imperf cut from an imperf press sheet, making it neither an error nor printer’s waste. So, in the era of press sheets, we have another reason why what seems like an error isn’t.