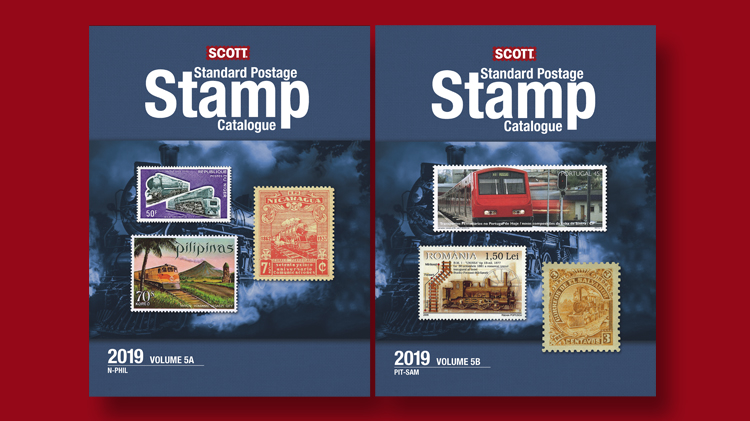 Netherlands New Guinea also received a line-by-line examination, resulting in more than 100 value changes; most are increases, with scattered decreases throughout. The 1953 5¢-on-5¢ ultramarine semipostal stamp (Scott B1) moves upward, from $10 unused to $12, and from $8 used to $9.50.

A review of early Palestine resulted in almost 90 value changes.

Editorial enhancements for Vol. 5A

Nepal: The 1898 ½a black with blurry impressions was added as major number 12B.

Netherlands: Several footnotes within the Netherlands listings were expanded and updated. Particularly noteworthy are newly added footnotes for coil stamps that were made from sheet stamps.

Netherlands Antilles: Two new minor listings were added to Netherlands Antilles. Scott 746a and 749a are assigned to the 1995 Flags issue with the colors in the flag of St. Martin reversed. The flag varieties show the blue on top, red on bottom. A new explanatory footnote states: “Both were quickly withdrawn from sale after the error was discovered. …” Also new among the Netherlands Antilles listings is the 2008 Shells 106¢ stamp without the country name. This variety has been assigned minor number 1193a.

Nicaragua: For many years, the Scott editors have reserved numbers for a set of six stamps overprinted in red or silver for the Year of Liberation and the 1980 Olympic Games. The stamps with the red overprint are now listed as Scott 1102 and 1102A-1102E. The stamps with silver overprints are assigned minor numbers 1102f-1102k. Nos. 1102f-1102k were not issued without the overprints.

Philippines: Many editorial changes have been instituted, including minor number listings for a watermark variety that has been added to the catalog.

Careful attention will reveal a small number of issues whose values jumped substantially in the face of apparent market volatility. A standout is the imperforate 1958 50-zloty Stagecoach souvenir sheet of one (Scott 830), which soars to $135 mint never-hinged and $52.50 used, from $20 both ways last year. The new values are italicized to indicate the editors had limited market data for this item.

Going against the trend of upward momentum are the 1919 Cracow postage dues (J1-J10), which see noticeable declines. On the other hand, collectors of German occupation and Polish offices abroad will be pleased to see gains in value almost across the board. Fairly typical is the 1933 Danzig 1z black (1K24), which soars from $52.50 to $70 unused, and from $120 to $140 mint. The used value ratchets up from $110 to $140.

Finally, don’t overlook the numerous stamps, such as imperforate varieties, described and valued in footnotes. Many of these see substantial gains in value.

Fresh market data and currency exchange rate fluctuations translated into more than 3,400 value changes for Portugal. Values for early and mid-20th- century stamps generally have held steady, while many later issues show small decreases. Very fine examples of pre-1940 issues are not commonly offered, while later material, especially issues of the past 50 to 60 years, is plentiful. These market realities, coupled with the roughly 15-percent decline in the value of the euro versus the dollar since our last comprehensive update, account for most of this year’s downward adjustments in values.

Stamps of the West Indies nation of St. Kitts are, for the most part, readily available. When coupled with lackluster demand, the result is predictable: a decline in values. This is seen throughout the more than 450 value changes recorded. Going against this falling market tide are stamps in used condition from 1980 through the late 1990s, which see modest gains in value. It is important to keep in mind that values for such stamps are for postally used examples with contemporaneous postmarks, not for stamps canceled-to-order.

Editorial enhancements for Vol. 5B

Poland: A few new listings appear among the modern postage issues. Single stamps for the 2009 Wladyslaw Hasior issue are Scott 3930A-3930D. These additions required renumbering the Hasior souvenir sheet from 3931 to 3930De. Scott 4146a is assigned to the 2014 Fish souvenir sheet of eight 4139-4146) with four labels.

Images have been added to the editor’s note regarding Poland’s 1946-50 issues surcharged “GROSZY.” The note explains: “To provide denominations needed as a result of the currency revaluation of Oct. 28, 1950, each post office was authorized to surcharge stamps of its current stock with the word ‘GROSZY’. …” Collectors are cautioned that counterfeits exist of these surcharged stamps.