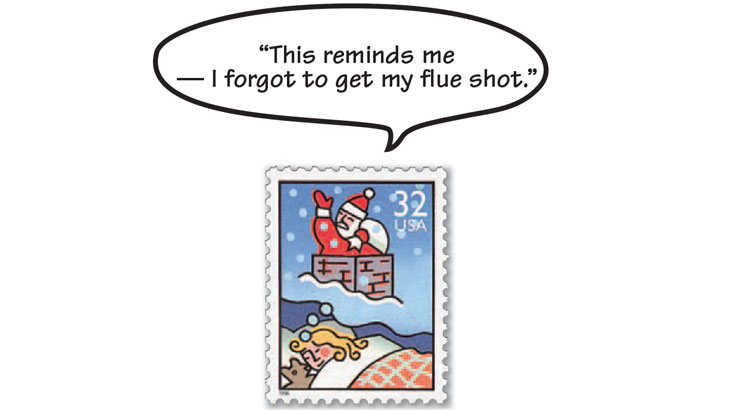 The January cartoon caption contest featured the 1996 32¢ Christmas stamp that shows a little girl asleep on Christmas Eve, dreaming of Santa (Scott 3110). The winner of the nonphilatelic part of the contest is Gordon Trotter of Sarasota, Fla., who used a

Dreaming, as the child in bed is doing in the design of the 32¢ Christmas stamp, allows for a wide range of ideas. But most of the entries for the January cartoon caption contest featuring this 1996 Christmas stamp (Scott 3110) focused on the problems Santa Claus might experience with the chimney.

Ray Ward of Van Buren, Ark., represents entries in the first category with “I knew I shouldn’t have eaten that full plate of cookies at Jimmy’s place!”

Charles Scanio of Queen Creek, Ariz., provides an excellent example of the second approach with “Ouch! I’m stuck! Couldn’t she have dreamt of a wider chimney?”

Several other entries have Santa reflecting on the first- class postage rate increases in January. Gerald Boren of Mesa, Ariz., represents this group with “I warned you Megan. Raise the price of stamps and you get coal!”

On the philatelic side, Rosemary Harnly of Red Wing, Minn., wins with the dreamer — evidently a more advanced collector — wishing: “I hope Santa doesn’t bring me another bag marked ‘500 Assorted World Wide Stamps’ this year.”

The nonphilatelic line winner, Gordon Trotter of Sarasota, Fla., relied on a play on words in his entry.

“This will be my last visit, thanks to Amazon.com and their drones!” from David D’Hondt of Sun City, Calif.

“Easy on the cancellation ink boys. I just got my suit back from the dry cleaners,” by Donna Smith of Wilmington, Del.

“I hope her Rottweiler is asleep this year,” sent by Wolf Berry of Hornell, N.Y.

“Did you get my tweet, Santa?” from David Vikan of Dickinson, N.D.

“The reindeer went to Florida without telling me, the elves are on strike, Mrs. Claus moved back to live with her parents. What could be worse … hmmm, do I smell smoke?” by Steve Kotler of San Francisco, Calif.

“I get better reception when I hold my cell phone up like this,” from Terry Meier of Tampa, Fla.

The next cartoon caption contest will be announced in the March 12 issue of Linn’s.