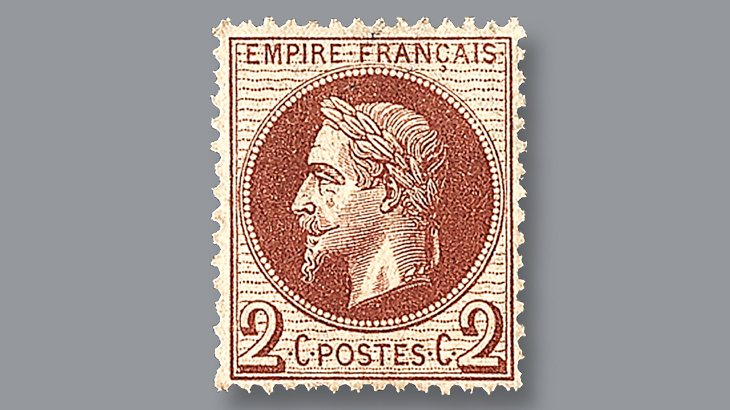 One of two upcoming APS on-the-road courses will look at French definitive stamps issued from 1849-1900.

The American Philatelic Society has added two more courses for collectors of all levels to be held prior to stamp shows in Ohio and Massachusetts this spring.

The “French Definitives: 1849-1900” course will take place March 21 prior to the Garfield-Perry March Party stamp show.

This day-long course begins with an introduction to French stamps and delves into their cancellations through the end of the 19th century.

Students will learn how to examine the usages of French and French colonies general-issue stamps, identify the differences between similar issues, use literary resources to aid in stamp identification, and determine the significance of stray white or colored marks.

Stan Fairchild, an expert on early French stamps and a collector since childhood, is teaching the course. It is being held at the Ohio Memorial Hall, River City Hall Complex, 21016 Hilliard Blvd., in Rocky River, Ohio, about  6 miles from the Garfield-Perry show hotel and 8 miles from the show venue, the La Villa Conference and Banquet Center, in Cleveland.

The cost for the course is $45 for APS members and $95 for nonmembers.

A two-day “Postal History of World War II in the Pacific Ocean from the American Perspective” course will take place May 2-3 prior to the Northeastern Federation of Stamp Clubs Philatelic Show in Boxborough, Mass.

Participants will learn how to collect civilian and military, occupation and POW/internee and official mail covers.

Lawrence will teach the differences among Army, Navy and civilian postal services; the affects moving battlefronts had on the routes and transport of mail; the ways U.S. carriers aided Allied mail; and postal relics that illustrate the Pacific theater.

For more information on these and other APS On the Road courses, visit the website, or contact the APS education department by telephone 814 933-3803, or email.