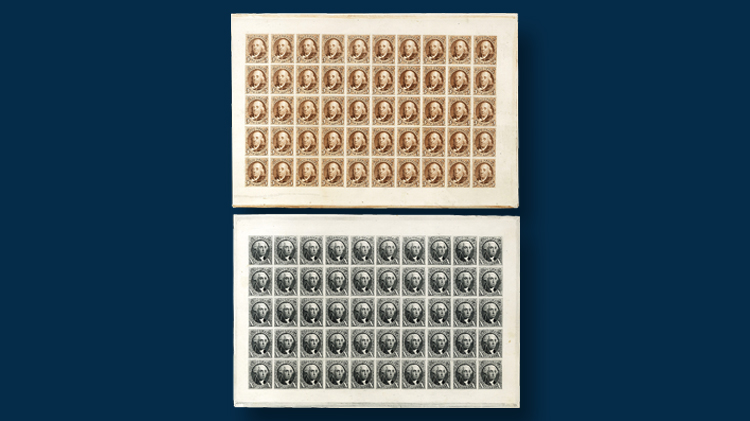 A rare set of complete plate proof sheets of the 1875 reproductions of the 1847 first issue of the United States was sold by Cherrystone Philatelic Auctions in New York City for $31,050. Shown is one of the two proof sheets.

In New York City, the Dec. 19-20, 2017, auction of rare stamps and postal history by Cherrystone Philatelic Auctioneers featured a set of plate proof sheets of the 1875 reproductions of the 1847 first issue of the United States (Scott 3P4 and 4P4). Only five to six full proof sheets were estimated to exist in 1947 by Clarence W. Brazer, a leading proofs and essays researcher.

The new owner of this set paid $31,050 for the acquisition, including a 15 percent buyer’s premium.

Cherrystone also auctioned an example of a well-known modern U.S. stamp error, the CIA invert, for $16,675. The engraved brown printing on this error of the $1 Candleholder stamp from the Americana definitive series (Scott 1610c) is inverted in relation to the lithographed colored flame and background.

The error’s nickname came about because the original find of a partial pane of 95 error stamps was purchased at the McLean, Va., post office by a CIA employee for the intelligence agency’s postal use.