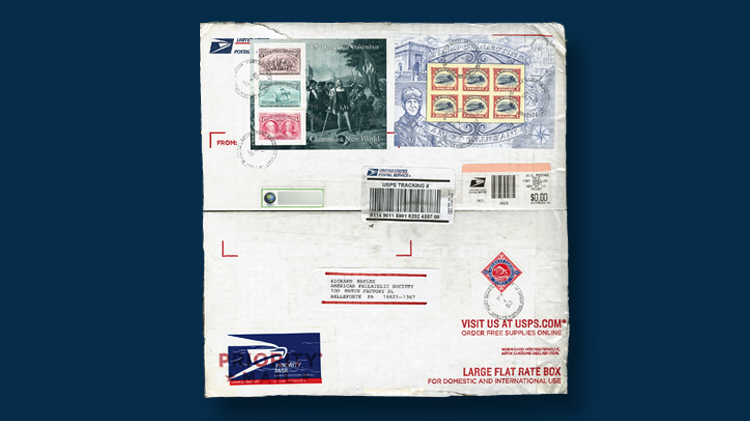 An imperforate $2 Jenny Invert pane of six pays $12 of the required $16.85 postage on this large flat-rate Priority Mail box mailed Nov. 4, 2013, from Fort Bragg, N.C., to the American Philatelic Society in Bellefonte, Pa. The box top also bears a 1992 Co

During that time I’ve sought out, with varying degrees of success, covers franked with $2 Jenny Invert stamps. Among my favorites are those bearing intact panes of six.

As you might expect, some of these covers were sent to collector friends who then returned them to me.

Illustrated here is a somewhat larger item: the top of a USPS large flat-rate Priority Mail box. It was mailed Nov. 4, 2013, from Fort Bragg, N.C., to the American Philatelic Society in Bellefonte, Pa.

Did you notice that suffix letter “b” in the Scott catalog number for the Jenny Invert pane? It’s there because the pane is the scarcer imperforate variety, cut from a press sheet without die cuts.

Mint never-hinged examples of the imperforate pane are valued at $70 in the 2018 Scott Specialized Catalogue of United States Stamps and Covers.

A dash appears in the used column for Scott 4806b, an acknowledgment that used examples are known to exist but that not enough market data exists to establish a value.

Despite its philatelic overtones, this slice of APS postal history is a welcome part of my Dollar-Sign Stamps collection — in no small part because of the addressee, Richard Nakles.

I met Nakles almost 10 years ago, when I last attended an APS Summer Seminar on Philately. Then as now, he serves as a volunteer.

Although Nakles’ presence is felt across all departments, he focuses on processing in-kind donations to the APS.

“My guiding principle has been from the start to maximize the value of the donation to the society while honoring the donor by providing their material to the membership,” Nakles explains in his staff profile on the APS website.

Having seen Nakles in action, I can attest to his devotion to his work and his desire to provide superior customer service to all who enter his sphere.

I leave you with a couple of observations about the philatelic nature of this cover.

First, the Columbian souvenir sheet was used 21 years after it was issued. Such an out-of-period use would make the cover less enticing to some postal historians.

On the other hand, the used Columbian sheet likely would be of greater value if removed from the cover because the “2013” year date in the two Fort Bragg postmarks would no longer be visible.

Second, the philatelic use of the Jenny Invert pane also would be blunted somewhat if it were removed. However, this would be difficult to do without risking further damage to the pane, because $2 Jenny Invert stamps do not respond well to a soak in water.

All things considered, I decided to keep the cover intact. Now all I need is an album page big enough to house it.

I welcome your stories about dollar-denominated U.S. postage stamps and postal history. Write to Dollar-Sign Stamps, Box 4129, Sidney, OH 45365-4129; or send an email to Charles Snee.