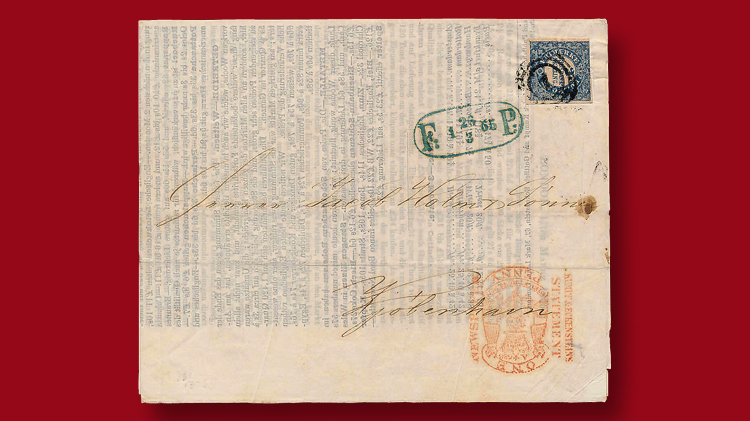 A market report mailed from London, England, to Copenhagen, Denmark, in 1855, with original postage paid by the red 1-penny newspaper duty stamp at lower right, and local foot post postage in Copenhagen paid by the 2-rigsbankskilling stamp at upper right. It is the only example of such a mixed franking recorded, and will be offered in the March 15-17 Postiljonen auction in Malmo, Sweden. 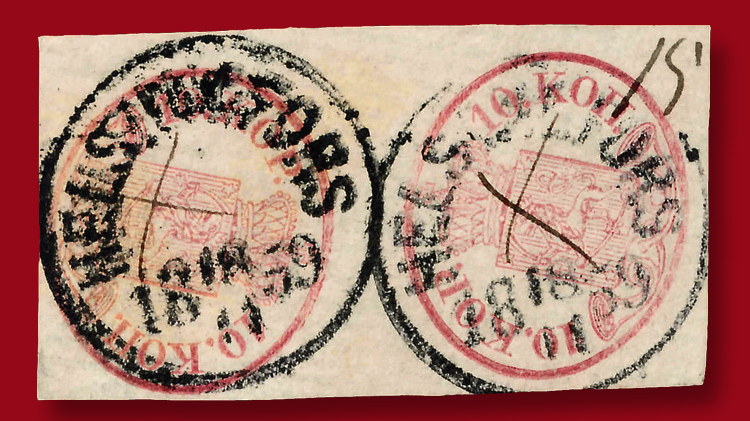 The Postiljonen auction will include Finland’s 1858 10-kopeck rose on wide laid paper as a tete-beche pair, the only such example known, as part of the Gummesson collection of Finland.
Previous
Next

Postiljonen, the international auction house in Malmo, Sweden, is celebrating its 50th anniversary with a special anniversary auction of Scandinavian and worldwide material March 15-17.

The auction will conclude with 266 lots of the Gummesson grand prix d’honneur collection of Finland, part 4.

In all, the sale presents some 1,680 lots of single stamps, multiples, postal history, collections and more, with items ranging from the lower price level to the higher price level, as the auction firm describes it.

The sale is taking place at the Postiljonen offices on the ground floor at Oresundshuset, Hans Michelsensgatan 9, in Malmo.

The auction opens Thursday afternoon with more than 300 lots of Iceland, including part 1 of the Hofn collection. First up are several examples of prephilately in the form of 19th-century stampless covers, followed by a selection of classic Iceland stamps, along with various proofs, franked postcards and letters.

A selection of material from Denmark reveals a dramatic postal history artifact that originated in London, England.

The cover is a market report dated March 17, 1855, and mailed by ship to Copenhagen, franked with a red 1-penny “Kumpf & Eckenstein’s Newspaper” duty stamp. It was further franked with the 1851 2-rigsbankskilling stamp, Thiele printing (Scott 1), the variety known as “foot of 2 nearly disjoined.”

The 2006 Carl Aage Moller certificate of authenticity notes that “The cover is in original condition without any improvements,” and adds that “No other similar mixed frankings with a 2 Rigsbankskilling stamp are known to exist.”

The stamp is tied with a numeral 1 postmark, and the cover is additionally struck with a framed “F.P.” datestamp.

Its provenance includes the collections of Sten Christensen and Mark Lorentzen (grand prix), and it is offered with a starting price of €15,000 (approximately $18,500 in late February).

Along with Iceland and Denmark, the Scandinavian lots include material from Faroe Islands, Greenland, Danish West Indies and Norway, plus an extended selection of Sweden.

The worldwide lots feature a specialized group of stamps and covers representing the first stamp of Spain, the 6-cuarto black Queen Isabella II of 1850 (Scott 1). Highlights include a single stamp struck with a red cancel from the day of issue (Jan. 1, 1850), and a cover with the deep blue “Trugillo” cancel, one of “only 3 or 4 known.”

Several lots of United States material are included, and among them is a cover from Cincinnati to Copenhagen sent by closed mail via England (as per the handwritten inscription). The cover is franked with six of the 3¢ ultramarine Locomotive stamp of the 1869 pictorial issue (Scott 114), affixed as two strips of three.

Dozens of different countries and regions are represented, including British Commonwealth, German states, Russia and Soviet Union, and more.

The Gummesson collection of Finland extends from the earliest kopeck issues of 1856 through the later classics of 1917.

A unique item among the offerings is the 1856-58 10-kopeck rose tete-beche pair, “the only one known on wide laid paper.” The stamps are canceled with black Helsingfors postmarks dated “18.11 1859,” and a pen cross.

This rarity was previously offered in the 1928 Lindberg sale by Sekula, the 1942 Rothschild sale by Friedl, and the 1966 Lichtenstein sale by H.R. Harmer of New York.

The Postiljonen catalogs can be viewed online, with a PDF available.