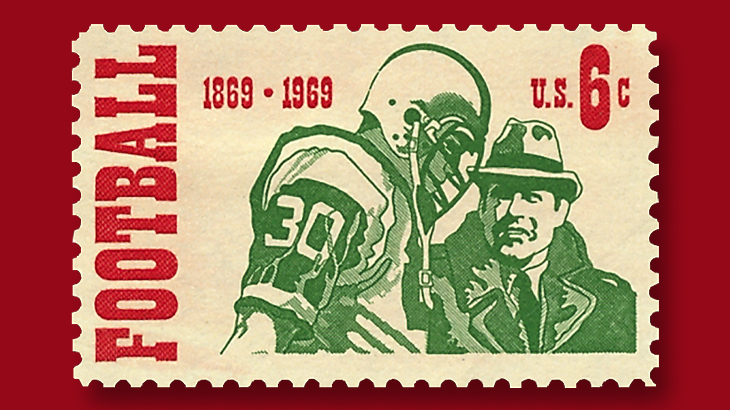 From 1969 when the 6¢ Intercollegiate Football stamp (Scott 1382) was issued until today, nearly 50 years later, football maintained its status as one of the most popular United States sports.

But of late, several problems have beset the sport, and it is not unfair to say that football’s apple cart has been tipped over, especially at the professional level.

The stamp commemorates the 100th anniversary of intercollegiate football competition, but for purposes of the March cartoon caption contest, it represents the sport from youth flag football up through the pros.

Of late, the actions of players, coaches and league management have been under a microscope with regard to issues such as traumatic brain injury, behavior on the field, and disciplinary actions resulting from felonious behavior.

So, I’d like you to put yourself under the coach’s hat, or the player’s helmet. What are they thinking of saying or thinking about the goings-on of the last few years and how it might affect the sport’s future? Or, in creating an entry, you can focus on stamp collecting, politics, the state of higher education, or whatever else occurs to you.

If you send an email, it is essential that your include your postal mailing address.

To be considered for the prizes, entries must reach me no later than March 23.

Readers, what do you think Columbus saw?