The Ameristamp Expo show will take place Feb. 23-25 in Birmingham, Ala. 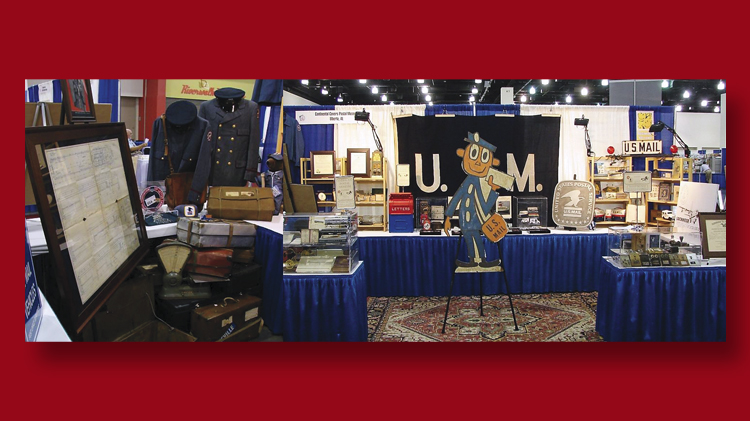 Some of the postal artifacts to be displayed by the American Mobile Postal Museum at the Ameristamp Expo stamp show.
Previous
Next

Ameristamp Expo, the annual winter stamp show and meeting of the American Philatelic Society, will take place Feb. 23-25 in the Birmingham-Jefferson Convention Complex, 2101 Richard Arrington Jr. Blvd., Birmingham, Ala. Hours are 10 a.m. to 6 p.m. Friday and Saturday, and 10 a.m. to 4 p.m., Sunday.

The show will include 32 stamp dealers and approximately 120 competitive exhibits. Admission is free, but registration is required.

Ameristamp will host the annual Champion of Champions single-frame championship, as well as the most-popular exhibit championship. Eligible exhibits are drawn from more than 30 annual World Series of Philately shows.

In addition, multiframe exhibits at Ameristamp will compete for a grand award, with the winner eligible for this summer’s Champion of Champions at Stampshow, Aug. 9-12 in Columbus, Ohio.

A few of the exhibit titles at Ameristamp include “St. Louis Street Car Mail, 1892-1915,” “The Erie Canal as Midwife, 1825-1862,” “Apollo/Soyuz Test Project,” “Boston’s Use of the 1847 Issue” and “California Mails, 18th Century to Statehood.” John Hotchner offers two entries in the noncompetitive court of honor, including “World Rarities and Uniquities.”

There will also be a court of honor exhibit for the 100th anniversary of airmail.

The American Mobile Postal Museum will have a display at the show. An unincorporated nonprofit association founded in 1997, the museum is operated by John and Kim Conti, lifelong philatelists and first-day cover collectors. The museum’s private postal history collection consists of United States Post Office Department and U.S. Postal Service artifacts and memorabilia that date back to the 18th century.

The show will offer a show cachet and special cancellations for all three days. The cancellations will honor the city of Birmingham, black history and the state of Alabama. The APS booth also will offer a selection of books, apparel and assorted gifts.

Rarities on display will include a 1918 24¢ Jenny Invert error, a George Washington free frank, and the autographed discovery sheet of the 1962 Dag Hammarskjold invert stamps.

On Feb. 22, the day before the show open, the APS Education Department will present two On-the-Road courses: “The Black Heritage Series, Preserving Our History” with Walter Faison, and “What is Astrophilately?” with Ray Cartier. The cost is $45 for APS members, or $95 for nonmembers. Find out more at stamps.org/On-the-Road-Courses.

APS staff members and officers will offer guided exhibit tours Friday and Sunday, and the APS education staff will present an overview for new collectors on Friday and Saturday.

The APS youth area, with activities geared toward young collectors, will be open during show hours all three days.

The awards banquet will take place Saturday night, with tickets $52 in advance, $57 when purchased at the show.

Several societies will meet, have booths, or make presentations during the show. Among those expected to be on hand are representatives of the American First Day Cover Society, Gastronomy on Stamps Study Unit, Penguins on Stamps Study Unit, Royal Philatelic Society of London, Scandinavian Collectors Club and Women Exhibitors.

The show organizers report that they need at least 100 volunteers, with two-hour shifts being the best way to serve.

Additional information on the show can be found online or by telephoning Kathleen Edwards, APS shows and exhibitions assistant, at 814-933-3803, ext. 217.