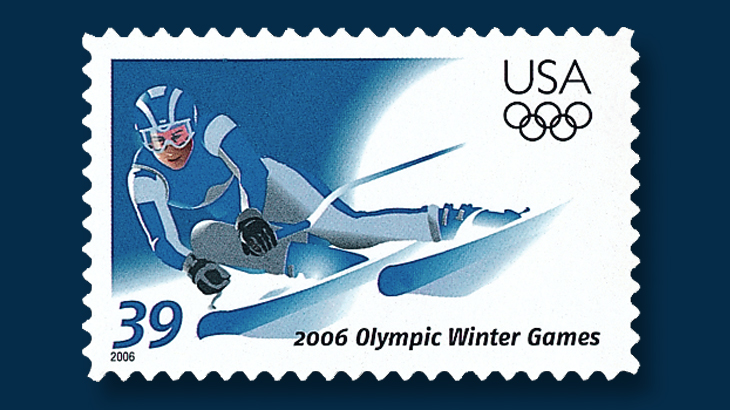 The cartoon caption contest stamp for February is this 2006 39¢ Winter Olympics commemorative stamp featuring a skier. What is he (or she) thinking about while racing at speeds up to 100 mph? Here is your chance to express the terror, enjoyment, competiti

With an ancient history, downhill, or alpine skiing, debuted as an Olympic sport at the 1936 Games at Garmisch-Partenkirchen, Germany.

Skiing has remained a popular Olympics sport, though it is given stiff competition from ski jumping and bobsledding/luge, both of which rival it for thrills and spills.

Along with sports, politics can play a role in the Games.

The ban allows the IOC to make exceptions for individual Russian athletes to compete under the designation of “Olympic Athletes from Russia,” but the powerhouse teams that contended and often won the medal race in past years will not be in South Korea.

If this situation and the Games themselves do not give you material for coming up with interesting things for the skier to say, then you can default to stamp collecting, politics, revisions of the tax law, or whatever else inspires you.

So, I’d like you to put yourself on the skis, and tell me what you think the competitor might be thinking or saying about his sport, the Olympics, stamp collecting, politics, the weather, or whatever else occurs to you.

Put your entry (or entries) on a postcard if possible and send it to me, John Hotchner, Cartoon Contest, Box 1125, Falls Church, VA 22041-0125, or email it to jmhstamp@
verizon.net. If you send an email, it is essential that your include your postal mailing address.

To be considered for the prizes, entries must reach me no later than Feb. 23.

Have any thoughts on the hot air balloon experience? Express them for November's Caption Contest