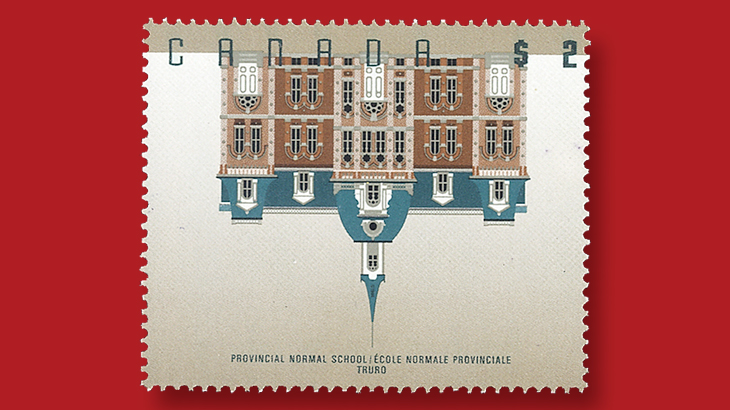 Canada’s 1994 $2 Provincial Normal School stamp with inverted inscriptions is being offered by Cherrystone in the upcoming auction. 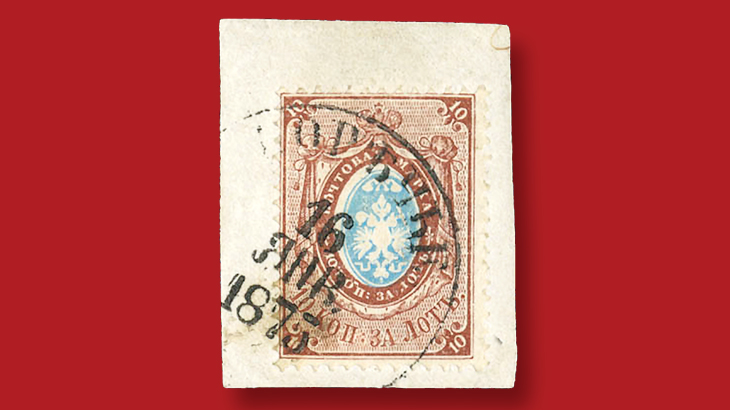 The upcoming Cherrystone auction in New York City will offer this very rare 1866 Russian 10-kopeck stamp with inverted center on piece.
Previous
Next

The sale of nearly 1,700 lots includes material from the United States, with some 136 single lots offering postage stamps, proofs, revenues, possessions and more, as well as additional collections and larger lots.

The British Commonwealth, Europe, Asia and South America are represented in the sale, along with featured material from Russia and the Soviet Union, China, France and colonies, and Germany and colonies.

The auction also presents a substantial number of errors, including many inverts from countries around the world.

One of these is the particularly rare 1866 10-kopeck brown and blue Coat of Arms stamp from Russia with center inverted (Scott 23b). The stamp is used on piece, tied with an 1875 Poretschie circular datestamp.

“There are ten recorded examples of this inverted center,” Cherrystone notes, “two canceled in Poretschie (others in Kibarty and Kursk), most of the known copies are defective. A splendid showpiece and a great rarity.”

The stamp is described as having excellent color with a clear center. It is accompanied by a 2003 Mikulski expertization certificate.

This very stamp on piece was previously auctioned by Cherrystone in April 2010, where it sold for $126,500, including the 15 percent buyer’s commission.

While much of the Cherrystone sale consists of classic material, some modern items are also included, such as a Canadian error from the 1995 printing of the $2 Truro Provincial Normal School stamp (Scott 1376b). The engraved dark green inscription on this stamp is inverted, printed upside down in relation to the lithographed illustration.

Seventy examples of the error with inverted inscription are known.

The example on offer is described as never-hinged and grading very fine, and includes a 2015 Vincent Greene certificate.

The 2018 Scott Standard Postage Stamp Catalogue lists the stamp with a value of $8,500. The stamp is opening at $4,500 in the upcoming sale.

The auction opens Tuesday with U.S. stamp and postal history lots, starting with several used examples of the 1847 5¢ and 10¢ stamps (Scott 1-2). A horizontal pair of the 10¢ black George Washington is offered, struck with red grid cancels and sporting full margins on all sides.

Described as having vivid color and a fresh appearance, the pair opens with a $1,400 bid. Cherrystone cites a $2,350 Scott catalog value.

The auction will conclude with large lots and collections, including many country-specific collections and additional worldwide and topical groupings.

The Cherrystone auction is taking place at the firm’s Manhattan galleries. The catalog can be viewed online, with online bidding options available on the Cherrystone website and at Stamp Auction Network.

A multitude of impressive rarities sold at Cherrystone's November sale