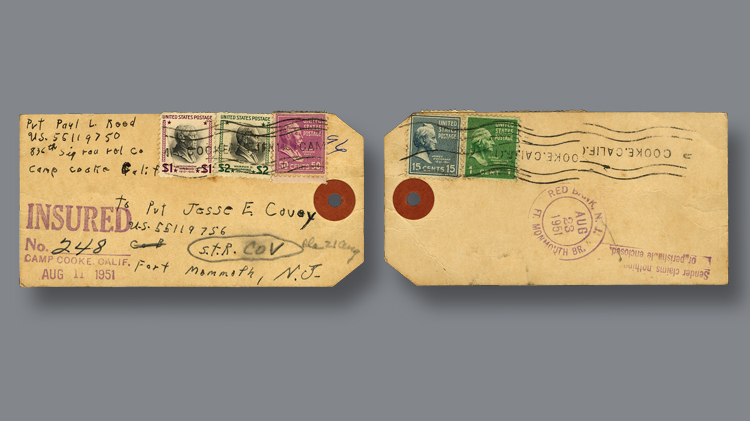 This insured mail tag, shown front and back, was once attached to a military duffel bag that traveled in 1951 from Camp Cooke, Calif., to Fort Monmouth, N.J.

Among the many joys I derive from writing this column is receiving feedback from readers.

Whether the comments are encouraging or critical, I take them seriously because the senders take time out of their schedules to reach out.

A few months back, I heard from Jesse Covey of Texas, who wrote to say he enjoys Dollar-Sign Stamps.

He also included a color photocopy of an insured mail tag that grabbed my attention.

“It was used to ship my duffel bag when I was transferred from Camp Cooke, California to Signal Corps School in Fort Monmouth, New Jersey in 1951,” Covey wrote.

The tag is franked with five United States Presidential definitive (regular-issue) stamps, for a total of $3.66 in postage. Aficionados of these stamps affectionately call them the Prexies.

Three Prexies — $1 Woodrow Wilson, $2 Warren G. Harding and 50¢ William Howard Taft — are affixed to the address side, and a 15¢ James Buchanan and 1¢ George Washington are on the back.

All five stamps are tied to the tag by a mute (no date) Camp Cooke, Calif., wavy-line postmarks.

A large purple handstamp at bottom left on the front of the tag indicates that Covey’s bag was sent with postal insurance Aug. 11, 1951.

Twelve days later, the bag (with the tag tied to one of the bag’s straps) arrived in Fort Monmouth, N.J., as shown by the Aug. 23, 1951, circular datestamp on the back.

Also visible on the back, upside-down in relation to the datestamp, is an incomplete strike of a two-line “Sender claims nothing fragile/or perishable enclosed” handstamp.

To tease out the rate breakdown, I reached out to postal historian Tony Wawrukiewicz, who writes the monthly Modern U.S. Mail column for Linn’s.

Wawrukiewicz pointed out that the bag was sent via parcel post, which meant that the postage was based on weight and the zone to which it was sent.

In this case, the distance from Camp Cooke to Fort Monmouth was greater than 1,800 miles, which equated to a Zone 8 mailing.

Wawrukiewicz provided a rate breakdown taken from U.S. Domestic Postal Rates 1872-2011, which he co-authored with the late Henry Beecher.

Rate breakdown in hand, I replied to Covey, asking him to send the tag so I could obtain high-resolution pictures of both sides for this column.

The tag arrived in mid-December, along with explanatory notes from Covey about the military addresses. These were helpful because the handwriting is difficult to decipher in places.

In Covey’s address, the third line reads, “Co B s.t.R.,” which translates to Company B Signal Training Regiment, the bag’s original destination.

Covey told me the bag was transferred to Company V of the Signal Training Regiment after it arrived on base. This explains why “Co B” is marked through and “CoV” written to the right of “s.t.R.,” both of which are circled to emphasize the change of address.

Quite a bit of information and some splendid dollar-sign stamps are packed onto this piece of military postal history, wouldn’t you say?