Here we have a first-day invitation stamp mismatch 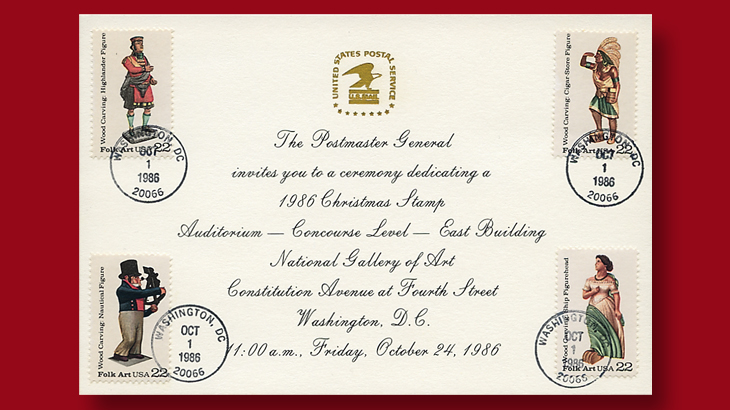 If this lovely souvenir invitation with first-day-canceled-Woodcarved Figurines stamps sets off alarm bells, there is a good reason. 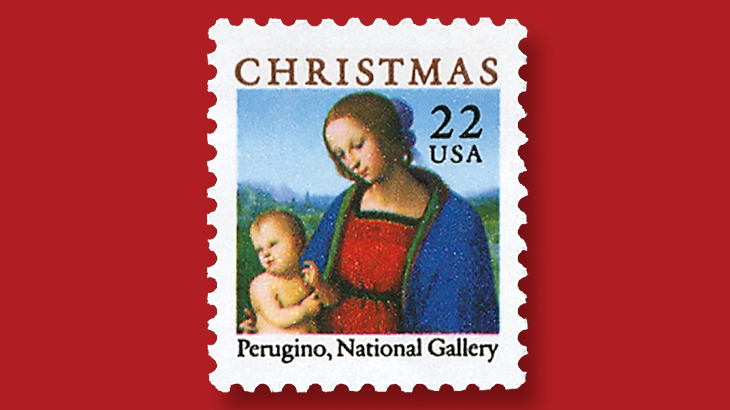 This 22¢ Christmas issue showing Perugino’s Madonna is the stamp that belongs with invitation card bearing the Woodcarved Figurines stamps.
Previous
Next

First-day cancellations are found on more than first-day covers. Among other media I have seen bearing these cancels are first-day programs, news articles, speech transcripts, historical brochures and magazine covers. A new one to me is the invitation card shown with this column.

But take a second look: The event and the stamps don’t match!

Part of the American Folk Art series, these stamps were issued in a block with the four designs se-tenant (side-by-side). Clockwise from upper left on the card, they show American highlander, cigar store Indian, ship figurehead, and nautical wood-carved figures.

Artistic license reared its’ head with the last figure. The model from which the stamp was designed stood in front of the shop of James Fales of New Bedford, Mass., some time during the 19th century. In the original, he was a right-handed sextant user.

The United States Postal Service turned him into a left-handed sailor so that all figures on the block would face inward (as they are shown on the invitation card).