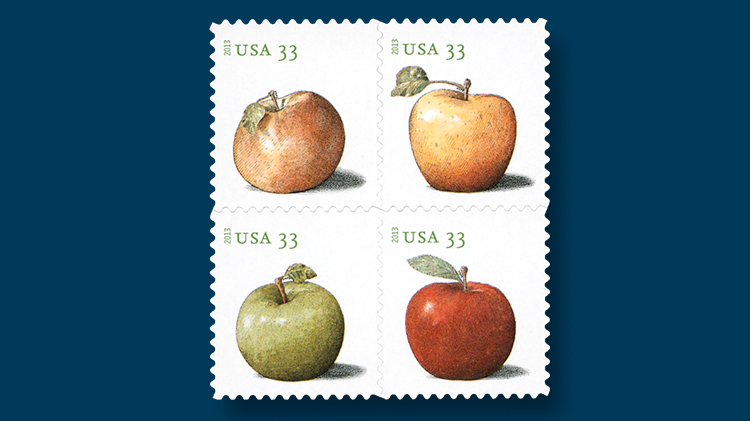 Four 34¢ definitive postcard-rate stamps picturing apples, including two varieties grown in the Yakima Valley in Washington, were released in 2013. 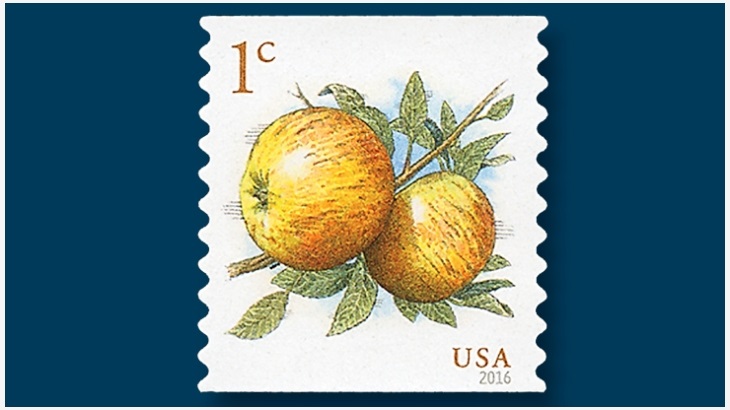 An editorial published in at least two Washington states newspapers criticized the apple variety (Albemarle pippin) selected to appear on this 2016 1¢ definitive stamp. 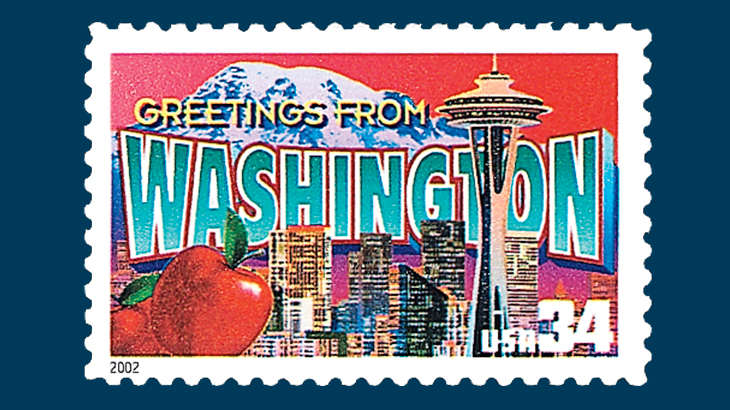 An apple is pictured on the 2002 Greetings from Washington commemorative stamp, issued with both 34¢ and 37¢ denominations. 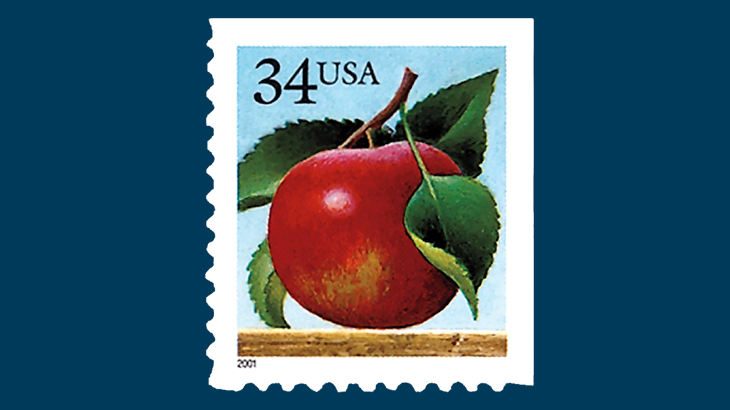 The first United States Apple definitive stamp was issued in 2001.
Previous
Next

A Linn’s reader from Olympia, Wash., recently sent in an editorial from the local newspaper The Olympian of Sept. 2, 2016, based on an editorial that had been published a couple of days earlier in another Washington state newspaper the Yakima Herald-Republic.

In the The Olympian, the editorial was headed “Postal Service messes up on new apple stamp.” The headline in the Yakima Herald-Republic read “Core values at odds when it comes to apple stamp.”

The editorial began: “We have a pippin to pick with the U.S. Postal Service.

“Not with the day-to-day services provided by hard-working carriers and other workers who sort and deliver tons of mail, but with some decisions that get a questionable stamp of approval from upper management types.

“The Postal Service recently unveiled its newest stamps, including one heralding apples. Our gripes? One, the stamp honors an obscure, mostly East Coast variety that is not seen much in Washington, which by far produces more apples than any other state in the country; the Yakima Valley, of course, is the epicenter of the state’s industry. Two, it’s a 1-cent stamp, which hardly seems respectful for a fruit that over more than two centuries has come to symbolize Americana.

“The stamp features the Albemarle Pippin, one of Thomas Jefferson’s two favorite varieties, a historical nicety that no doubt resonates in states that comprise the 13 original colonies. A better pick would have been one of the varieties (Gala, Fuji, Honeycrisp, even Red Delicious) that have rightly made the Yakima Valley famous.”

What the editorial lacks is historical context. The 2016 1¢ stamp showing Albemarle pippin apples is the third U.S. definitive issue featuring apples. The first (Scott 3491) was released in 2001 for the first-class rate at that time, 34¢.

It depicts a red apple — not otherwise — identified painted by Neil Seidler.

Of the four, the golden delicious and the Granny Smith are among the numerous varieties grown in Yakima Valley.

So the editorial may be right regarding the 2016 1¢ Apple stamp, but it is seriously off the mark with regard to the history of apples on U.S. stamps.

This reminds me of the quote attributed to Louis XIV, “Every time I appoint someone to a vacant position I make a hundred unhappy and one ungrateful.”

The Postal Service often finds itself in the same position when it issues a stamp.

How many times did I hear during my 12 years on the Citizens’ Stamp Advisory Committee, “If you can issue a stamp for that, then why not for [my favorite topic].”

In other words, whatever the USPS does, there will be a critic, often with a grievance and a poor memory.