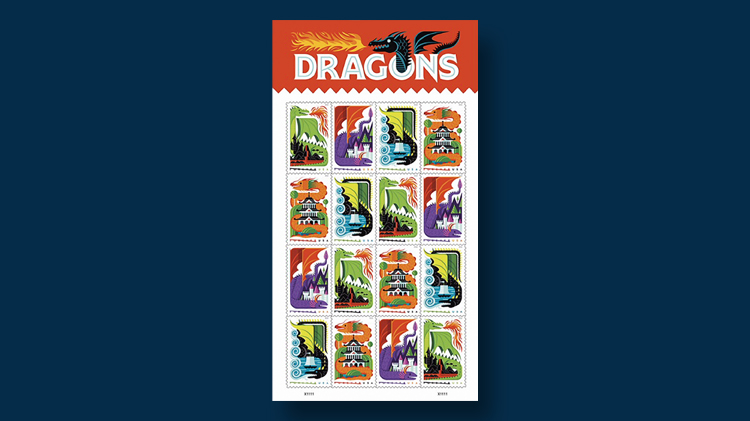 The pane of 16 Dragons stamps (four each of four designs) features a decorative header across the top. 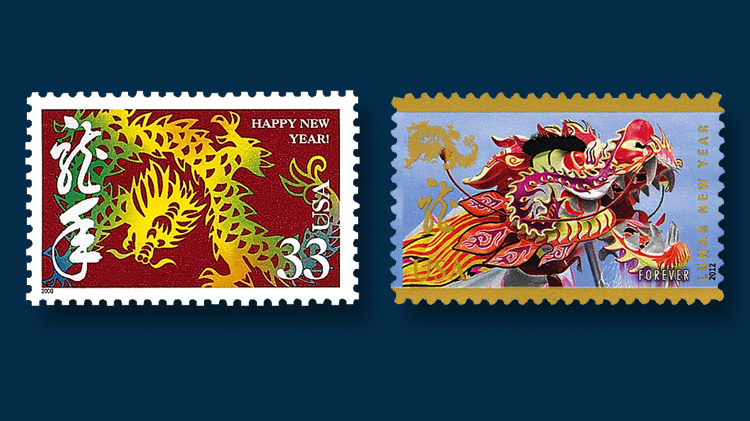 Previous United States stamps depicting dragons include these two issued for the Year of the Dragon in the Lunar New Year cycle, from 2000 (left) and 2012 (right). 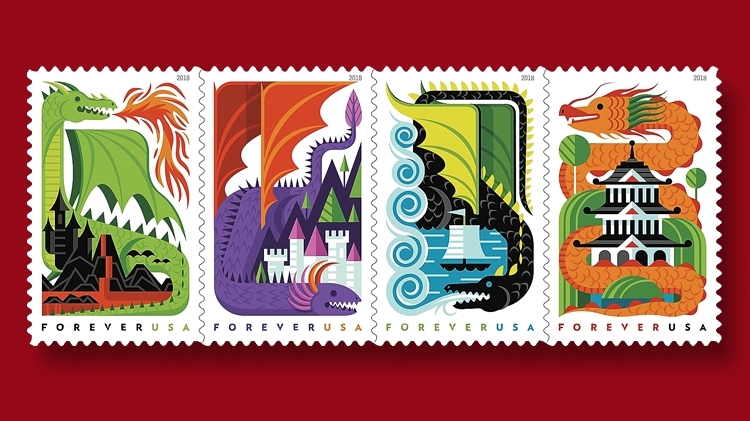 Four dragons rendered in different colors and in different settings fill the designs of four United States forever stamps that will be issued Aug. 9. Each stamp includes a foil accent. 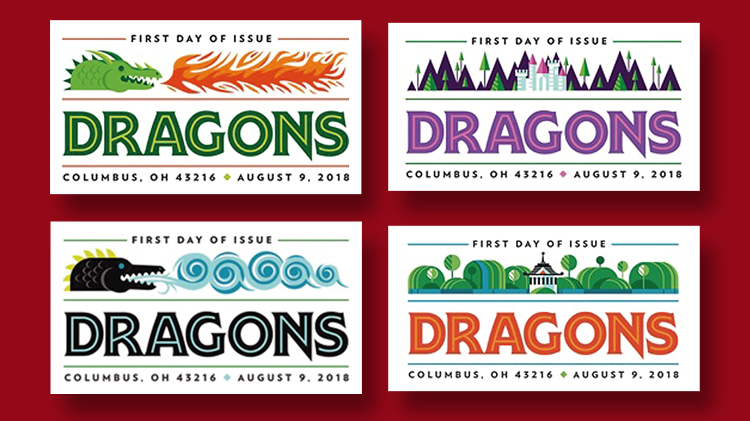 Four digital color first-day cancels have been prepared by the U.S. Postal Service, presumably for use on USPS-prepared first-day covers. 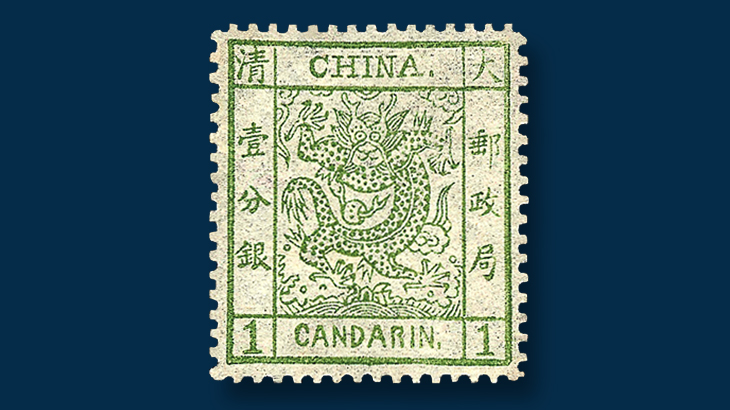 The first stamps of China, issued in 1876, each celebrated the imperial dragon in the central design. Many stamps worldwide show dragons. 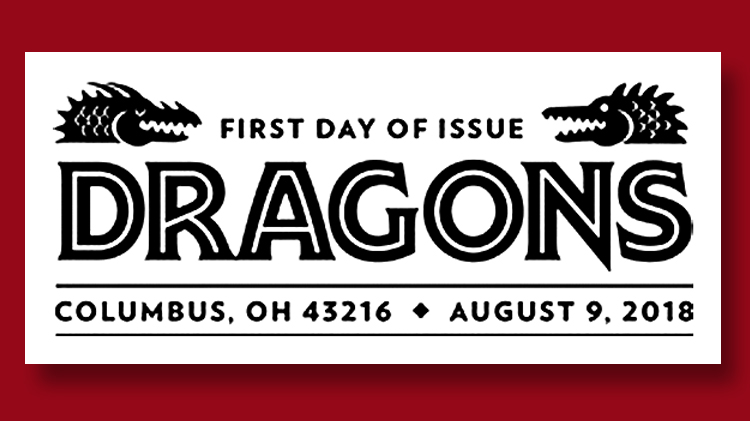 The black pictorial first-day cancel will be offered for most collector-prepared first-day covers, and for USPS covers as well.
Previous
Next

The show is co-hosted by the American Topical Association, which is holding its own annual convention, National Topical Stamp Show 2018, at the same location.

The noon first-day ceremony will take place on the show’s opening day, Thursday, in Exhibit Hall B of the Greater Columbus Convention Center, 400 N. High St.

The stamp show will continue through Sunday, Aug. 12, and is free and open to the public.

The U.S. Postal Service has a registration site for the free public ceremony at www.usps.com/dragons.

The Postal Service provided a descriptive introduction to the world of dragons.

“Throughout history and across the globe — from Europe to the Middle East to Asia to the Americas — people have enjoyed tales of mythological creatures. Though these legendary animals vary in shape, size and color, they’re most often described as lizard-like with four legs, sharp claws, scales, wings and spiky tails.”

The four new Dragons stamps are offset-printed in panes of 16 with hot foil stamping. Four process colors are used to print the designs, and the foil element likely will accent the artwork.

Postal Service spokesman Roy Betts told Linn’s Stamp News that the foil component is featured on each stamp and on the illustrated header across the top of the pane, which shows a fire-breathing dragon emerging from the letter “O” in “DRAGONS.”

The four stamp designs each depict a single dragon in a dramatic setting.

A green dragon breathing fire towers over a black medieval-inspired castle as bats fly across dark and ominous mountains. A purple dragon with bold orange wings encircles a white castle deep within a green forest. On the seas, a daunting black dragon with green and gold wings approaches a helpless sailing ship. And a massive coiling orange dragon is shown surrounding a multilevel pagoda.

“The wingless orange dragon weaving its way around a pagoda is inspired by creatures found in Asian art, architecture, folk religion and ancient lore,” according to the Postal Service. “The Chinese in particular have venerated the dragon for thousands of years.”

In fact, the first stamps of China, issued in 1876, celebrate the Imperial Dragon in the vignette, or central design (Scott 1-3), but even then the dragon was an ancient creature encountered in mythology from around the world. Evidence of dragons in artwork and stories dates back thousands of years.

The ouroboros, a serpent that bites its own tail, encircles a portrait on the sarcophagus of the Egyptian king Tutankhamen from the 14th century B.C., and has evolved into a dragon in later depictions.

In the epic Old English tale Beowulf written some 10 centuries ago, the hero’s final battle is against a fire-breathing dragon that he defeats at great cost.

The legend of St. George slaying a dragon and rescuing a princess developed from an 11th-century interpretation of pre-Christian mythology.

Sometimes beneficent but often hostile and deadly, dragons have persisted into modern culture.

The dragon Smaug is a key antagonist in J.R.R. Tolkien’s 1937 novel The Hobbit, and dragons are also an important element in A Song of Ice and Fire, the fantasy novel series by George R.R. Martin that has been adapted as the popular HBO series Game of Thrones.

The recurring themes of dragons throughout history have ensured their appearances on postage stamps worldwide, from China’s earliest issues to a 2018 Great Britain set commemorating Game of Thrones (Scott 3679-3695).

Over the past 20 years, as more and more countries have issued stamps annually to celebrate the beginning of the lunar new year, dragons have been featured as one of the 12 symbols of what is known as the Chinese zodiac.

In consecutive United States Lunar New Year series, stamps with dragon illustrations were issued in 2000, and again in 2012, to mark the coming year of the dragon.

The 2012 nondenominated (45¢) forever stamp (Scott 4623) shows the large papier-mache head of a costume dragon one might see performing a dragon dance in a street parade. The illustration was painted by artist Kam Mak.

The ATA’s most recent checklist of dragon stamps gives details of 565 different stamps from around the world.

The ATA’s checklists are available to members of the association. Information about the availability and cost of ATA checklists is found at www.americantopicalassn.org/checklists.shtml.

The lettering for the word “DRAGONS” is in a different color on each of the color cancels, matching the colors of the four dragons in the stamp set.