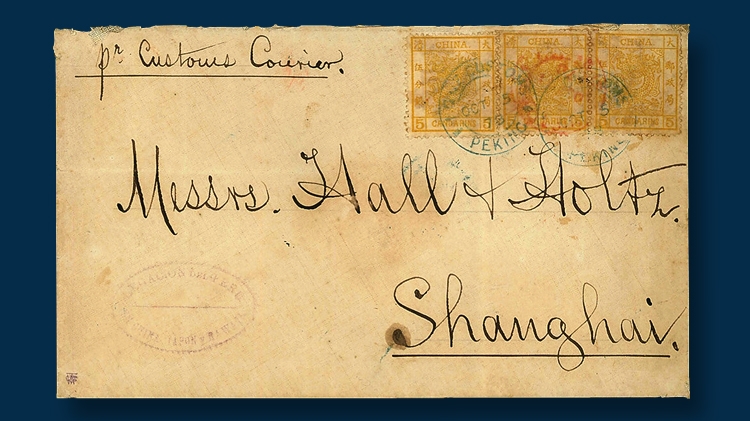 This 1878 envelope mailed to Shanghai was sold June 16 by InterAsia Auctions for $2.43 million, setting a new record.

The June 16 auction in Hong Kong offered part three of the Jane and Dan Sten Olsson collection of Large Dragons, the name given to the first stamp issue of Imperial China.

This cover was mailed to Shanghai on Oct. 5, 1878, bearing a pair and a single of the 1878 thin paper 5-candareen stamp in bister orange (Scott 3a). It is the earliest known cover bearing a Large Dragon stamp.

Although this is a record sum for Chinese philately, worldwide it is still eclipsed by the 1847 Mauritius Bordeaux cover, which in 1993 was sold at auction for $3,829,500 by David Feldman in Zurich, Switzerland.

The Bordeaux cover is franked with the 1847 Mauritius 1-penny and 2d stamps and addressed to Bordeaux, France.