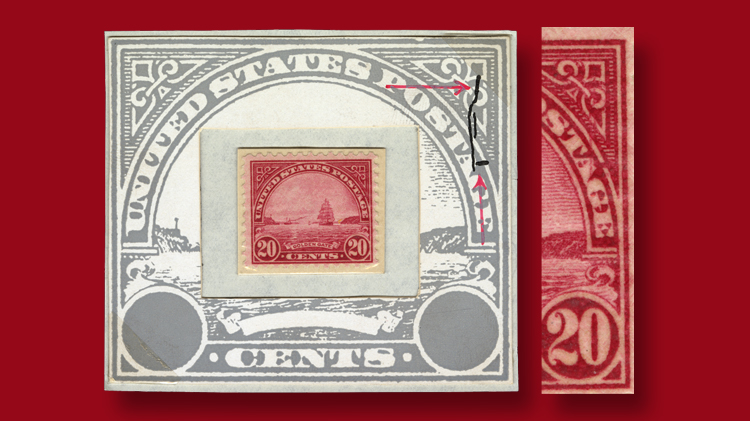 Not listed in the Scott U.S. Specialized catalog is this 20¢ Golden Gate plate crack that can be seen in the upper right area of the stamp. 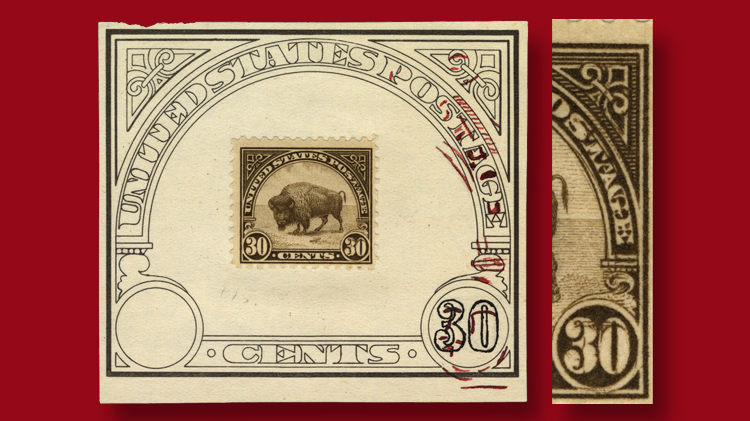 Listed in the Scott Specialized Catalog of United States Stamps and Covers, the double transfer on this Fourth Bureau Issue 30¢ American Buffalo stamp is obvious in the lower right corner.
Previous
Next

In the catalog, fewer than 40 plate varieties are listed for the entire Fourth Bureau Issue of 1922-38.

This is compared to 40 8½-by-11 pages of listings in the Encyclopedia of Plate Varieties on U.S. Bureau Printed Postage Stamps by Loran C (“Cloudy”) French, published in 1979 by the Bureau Issues Association, which was renamed the United States Stamp Society in 2000.

A double transfer that the Scott catalog doesn’t list but that is mentioned in the French encyclopedia is found on the perf 11 20¢ Golden Gate Bridge stamp (Scott 567).

French defines a double transfer, or DT, as occurring “when an impression which was entered out of alignment, or for some other reason, is not completely removed from the plate before a new impression is laid down. Remnants of the first impression pick up ink and reproduce their image along with the new impression.”

The discovery of this double transfer is noted in a letter dated April 16, 1931, that I have just obtained. It is from collector K.R. Cobb Jr. in Rochester, N.Y., to a dealer in Buffalo.

The letter reads: “A Double Transfer has been found on the current 20¢ stamp.

“It is clearer and more pronounced than the one recently located on the 30¢ Buffalo (copies of which have sold for $10 to $20 each).

“The 20¢ Double Transfer is found on the Upper Left Pane of Plate #18925 and the stamp showing the D.T. is the one directly under the plate number [which would be stamp #5].

“I am anxious to get a block of 9 showing this variety. If you can help me out [I] will greatly appreciate [it] and trust the information will enable you to find a few for yourself. Maybe you have some in your Post Office.”

The 30¢ double transfer referred to in the letter is found on Scott 569, shown in the first image above. It is in position upper right 52 of plate 16065.

The first impression was entered incorrectly on the plate, and was burnished out so it could be re-entered.

But the original was not completely removed, leaving evidence of that first impression along with the intended impression.

This double transfer is listed and pictured in the Scott U.S. Specialized catalog.

The second image above is a different 20¢ plate variety; this one a plate scratch on Scott 698, plate 20538, position lower right 12. It isn’t listed in the Scott catalog, but it is listed in the French encyclopedia.

Plate variety collecting is a deep and rich field that can provide hours of fun.

All you need is a magnifier, but a copy of French’s book would help.