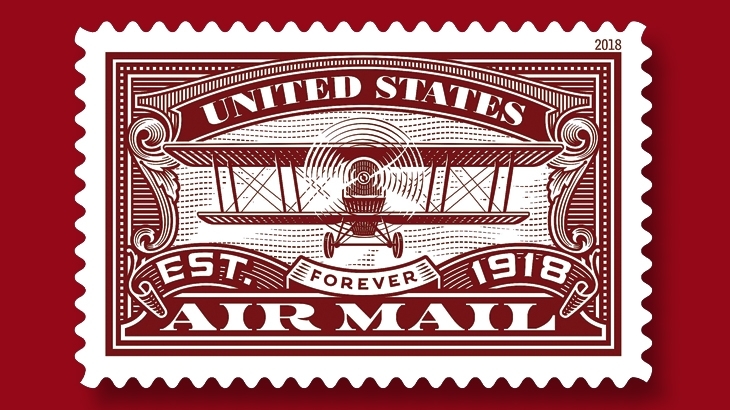 A new nondenominated (50¢) forever stamp will be issued Aug. 11 to continue the United States Postal Service’s commemoration of the U.S. airmail service centennial.

The new red U.S. Airmail Anniversary stamp is a companion to the blue anniversary stamp issued May 1. The two stamps share identical designs by illustrator Dan Gretta and USPS art director Greg Breeding, the only difference being the ink colors used to print the stamps.

Like its predecessor, the red stamp is intaglio-printed using a design mechanically reproduced from an original illustration created digitally.

The stamp design shows a Curtiss JN-4H “Jenny” biplane similar to the first planes used by U.S. Army pilots to move the mail by air.

That plane was also featured on the nation’s first airmail stamp, the 24¢ Curtiss Jenny (Scott C3) issued May 14, 1918. That bicolor stamp is printed in carmine rose and blue, similar to the two colors used separately on the 2018 stamps.

A curved banner across the top of the new stamp reads “United States,” while a second banner along the bottom reads “Air Mail.” A ribbon inscribed “Est. 1918” is positioned just below the vignette, which shows the front of the Jenny biplane with its propeller turning.

The event will coincide with the museum’s Airmail Centennial Celebration Family Day.

Information about the museum’s activities can be found here.

For online registration for the first-day ceremony visit www.usps.com/usairmail.

The new stamp marks the 100th anniversary of the U.S. Post Office Department taking charge of the nation’s airmail service.

“On May 15, 1918, in the midst of World War I, a small group of Army pilots delivered mail along a route that linked Washington, Philadelphia, and New York — initiating the world’s first regularly scheduled airmail service,” the Postal Service noted in a press release.

The blue anniversary stamp issued May 1 is tied to the initial May 1918 airmail delivery effort.

The Postal Service has prepared two first-day cancels to be used for the new stamp.

The color postmark adds the element of a winged globe, similar to early air service emblems shown on the 16¢ dark blue airmail stamp of 1923 (Scott C5), and later airmail stamps such as the 1930 5¢ violet Winged Globe (C12).

The designs of the two postmarks mirror those of the first-day cancels offered for the May 1 blue anniversary stamp, with the difference in the designs being the date of issue.