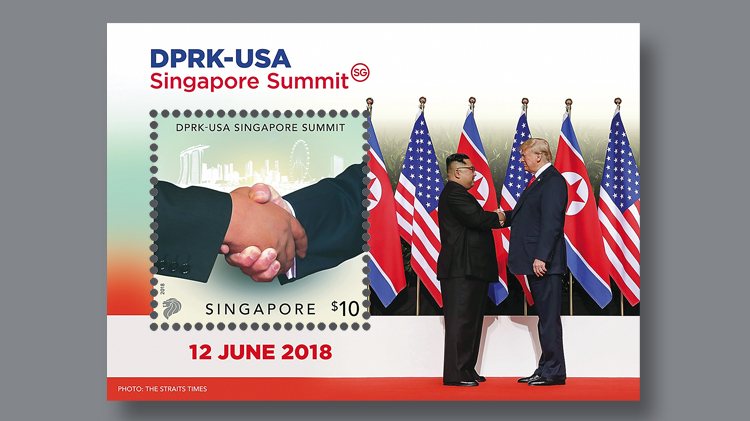 Issued July 20, the souvenir sheet was a collaboration between Singapore Post Ltd. and The Straits Times newspaper.

The sheet includes a $10 stamp featuring the handshake between Trump and Kim. A drawing of the Singapore skyline with buildings and the giant Ferris wheel, the Singapore Flyer, can be seen in the background.

The selvage area of the sheet reproduces a photograph of the two leaders shaking hands in front of the flags of the United States and North Korea.

The new-issue announcement from Singapore Post said: “When the two leaders appeared together in the courtyard of the Capella Singapore hotel for their historic handshake, photographers sprang into action to capture the moment. This picture was taken by photojournalist Kevin Lim from The Straits Times.”

Warren Fernandez, editor-in-chief of The Straits Times and Singapore Press Holdings’ English, Malay, Tamil Media Group, said: “Kevin performed brilliantly and delivered. His photos ran not only in The Straits Times but in leading publications around the world. It is fitting to commemorate what he achieved with a special stamp to mark the historic Summit here in Singapore.”

According to a report in The Straits Times, a line of about 50 people had formed at Singapore’s central post office before the stamp was officially placed on sale on the morning of July 20. The stamp collector who was first in line, Lim Hong, had waited about 90 minutes.

Lim told reporter Jasia Shamdasani: “I started queueing at 9 a.m. because this stamp marks an important occasion for Singapore. It is very rare for statesmen from two different political backgrounds to come together to talk about peace.”

Wong Wui Kong designed the souvenir sheet. Secura Singapore Pte. Ltd. printed it by offset lithography. The sheet measures 113 millimeters by 80mm, and the stamp is square, 45mm by 45mm.