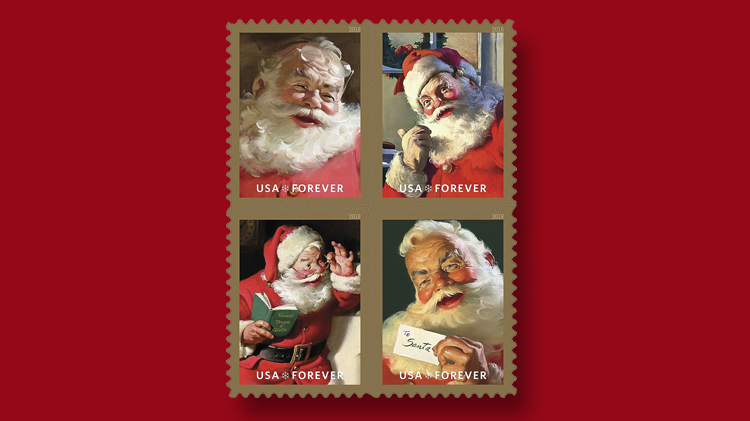 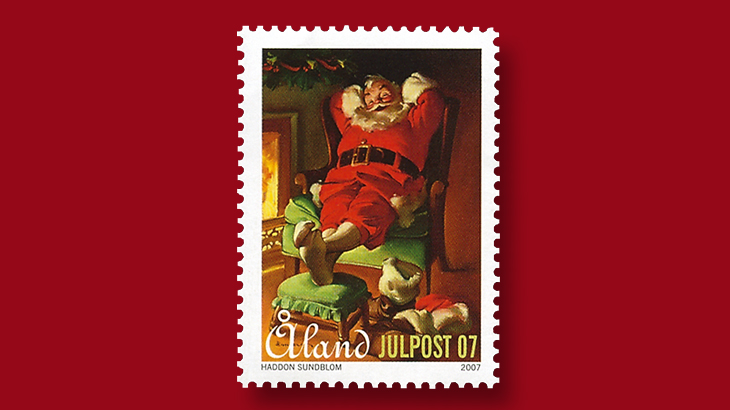 In 2007, Aland depicted one of Haddon Sundblom’s Coca-Cola Santa images on its Christmas stamp. Sundblom’s father was from Aland, an archipelago located at the southern end of the Gulf of Bothnia between Finland and Sweden.
Previous
Next

Shortly after the first day of summer, the United States Postal Service revealed the designs of four Christmas stamps to be issued later this year.

According to the June 26 announcement from the Postal Service, the four forever Sparkling Holidays stamps feature images from Haddon Sundblom’s paintings created for Coca-Cola Co. holiday advertisements that ran from the 1940s through the early 1960s.

In addition to showing images of Santa, each stamp includes a snowflake design at the bottom between USA and FOREVER.

Sundbloom (1899-1976) first created a Santa Claus image for Coca-Cola for ads that appeared in the Saturday Evening Post in 1931.

On its website, www.coca-colacompany.com, the company said: “For inspiration, Sundblom turned to Clement Clark Moore's 1822 poem A Visit From St. Nicholas  (commonly called Twas the Night Before Christmas). Moore's description of St. Nick led to an image of a warm, friendly, pleasantly plump and human Santa. (And even though it's often said that Santa wears a red coat because red is the color of Coca-Cola, Santa appeared in a red coat before Sundblom painted him.)"

The Postal Service isn’t the first postal administration to feature Sundblom’s Santa artwork on a Christmas stamp. In 2007, Aland pictured Sundblom’s painting of Santa relaxing by the fire with his boots off on its nondenominated “Julpost” Christmas stamp (Scott 254). Sundblom’s father, Karl Wilhelm Sundblom, was from Aland.

The announcement from USPS did not include the issue date for the Sparkling Holidays stamps nor where the first-day ceremony will be held, but did say that additional details will be announced before the stamps’ release.