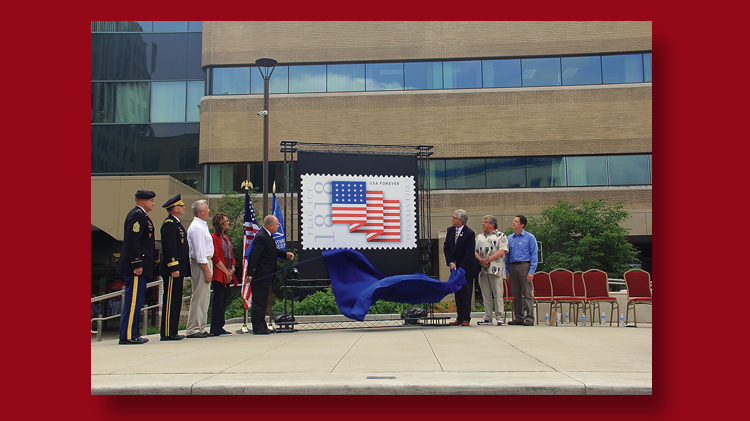 The June 9 unveiling of the Flag Act of 1818 commemorative forever stamp in Appleton, Wis., just prior to the 68th annual Flag Day parade.

What is the right recipe for a successful first-day ceremony? It depends on the subject of the stamp or stamps being issued, but sometimes a location lends itself well for an event.

A good example is the Flag Act of 1818 commemorative forever stamp dedication June 9 in Appleton, Wis.

I grew up in the area, and Appleton’s Flag Day parade is a big deal, to say the least. This year was the 68th annual parade.

The community’s dedication to the parade caught the attention of officials at U.S. Postal Service headquarters, and they selected Appleton as the first-day city for the stamp.

Approximately 300 people gathered in Appleton’s Houdini Plaza for the stamp ceremony. Red, white and blue were the prevalent colors for the day.

Many people lined up to purchase stamps and get first-day cancels. From my quick observation, I estimate that the Postal Service sold a couple hundred sheets of stamps.

Appleton was clearly honored to host the event. This was especially evident in the media coverage the ceremony received.

The Postal Service invited two local news anchors, Erin Davisson and Tom Zalaski of CBS WFRV-TV 5, to serve as the emcees for the event. This was an excellent choice, as their network has broadcast the parade for years. It also worked well because they reported on the ceremony on the evening news.

In addition, the television station rebroadcast the parade later in the day and included a feature report on the stamp as well.

Having a news reporter or anchor as the master of ceremony isn’t a new strategy, but it’s an effective one that was well done in this instance.

Local print media also reported on the stamp ceremony; it received front-page treatment in the Post-Crescent.

Appleton Mayor Tim Hanna and parade representatives who spoke at the ceremony expressed their appreciation for the event and for the Postal Service’s selection of Appleton above all others.

Overall there was a lot more interest in this stamp issue than I anticipated, and that serves well in telling the story of stamp collecting and history to a new audience.

If you have a pane of 20 of the Flag Act of 1818 stamps, take a close look at it. The pane only includes two plate numbers in the bottom corners instead of one in each corner.