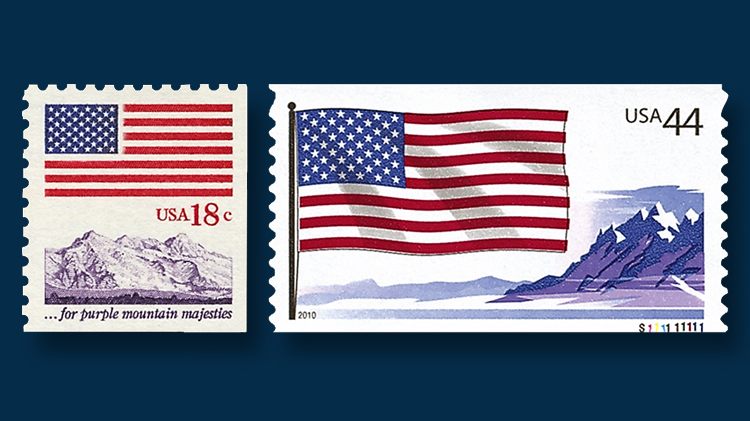 The theme of America the Beautiful has been featured before on U.S. stamps. These examples are from the 1981 Flag and Anthem issue (left), and the 2008-12 Flags of our Nation commemorative coil series (right). 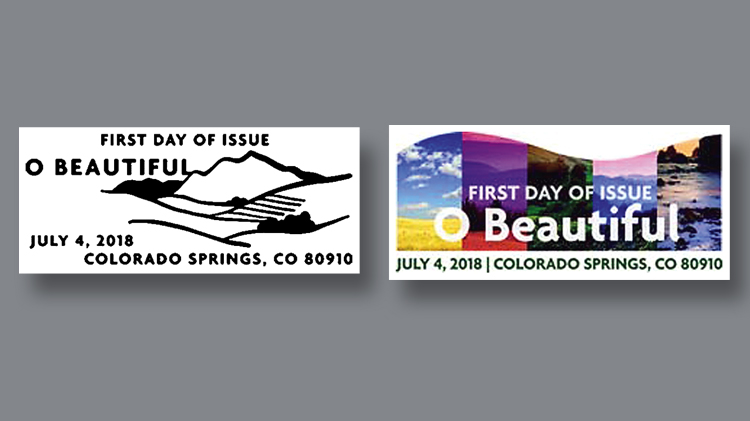 The U.S. Postal Service prepared two pictorial postmarks for the O Beautiful first-day cancels. The black postmark features one scenic view. The color postmark reproduces segments of scenes similar to those on stamps in the set. 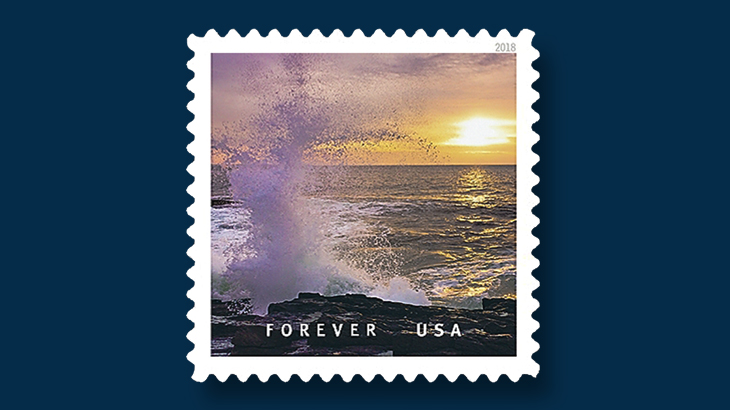 A photograph of Bailey Island, Maine, on one of the 20 stamps in the O Beautiful set being issued July 4 by the United States Postal Service. The full pane of 20 is pictured on page 12. 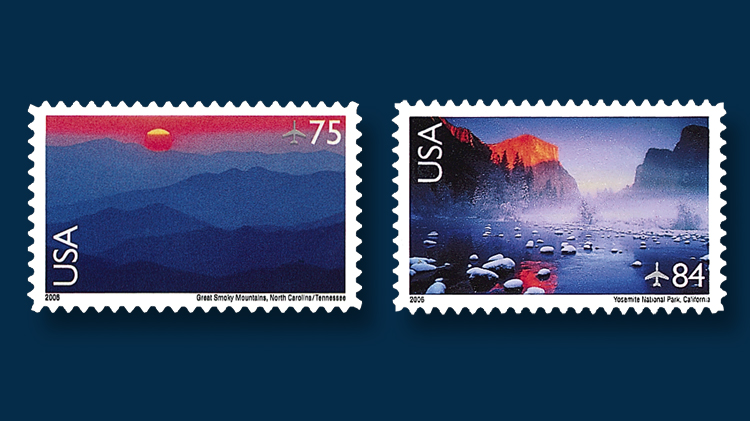 A few of the locations pictured on the new O Beautiful stamps have been featured on previous United States stamps. These two airmail issues from 2006 show scenery from Great Smoky Mountains National Park on the 75¢ stamp at left and Yosemite National Park 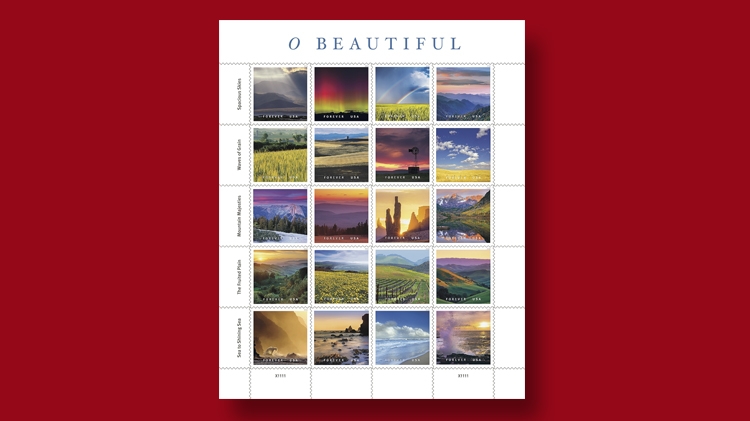 The first-day ceremony for the O Beautiful stamp set will take place during the evening on July 4 in Colorado Springs, Colo. Each stamp in the set of 20 reflects imagery from the patriotic song America the Beautiful.
Previous
Next

A new set of United States stamps captures the beauty of the nation’s natural scenery while paying tribute to a stirring song that praised that beauty more than a century ago.

Kevin Romero, a U.S. Postal Service district manager, will participate in the ceremony, as will the orchestra.

For more information, and to register in advance for the ceremony, visit https://uspsonlinesolutions.wufoo.com/forms/o-beautiful.

Twenty different photographs have been selected as stamp images and arranged on the pane to echo familiar phrases from America the Beautiful, the song composed by Katharine Lee Bates with music by Samuel Augustus Ward.

As the song is sung today, the lyrics in the first verse are “O beautiful for spacious skies, for amber waves of grain, For purple mountain majesties, above the fruited plain. America! America! God shed His grace on thee, and crown thy good with brotherhood from sea to shining sea.”

The Postal Service explained in a May 17 press release: “Each of the stamps features a photograph that helps illustrate one of five phrases from the song’s first verse: ‘Spacious Skies’ (top row), ‘Waves of Grain’ (second row), ‘Mountain Majesties’ (third row), ‘The Fruited Plain’ (fourth row), and ‘Sea to Shining Sea’ (bottom row).”

Inscriptions along the left margin identify the themes of the five horizontal rows, while the banner margin across the top features the first words of the song — and the title of the stamp issue — “O Beautiful.”

Following are descriptions of the scenes pictured and the photographers credited, as grouped in each of the five horizontal rows of four stamps. (After the initial identification here, photographers are credited by last name only.)

Although a few of these locations have been highlighted previously on U.S. stamps, the majority have not.

That airmail series and the 2016 National Parks set of 16 forever stamps (Scott 5080) also made use of photographs to display various scenic areas across the country.

The new stamp set is not the first to make use of lines from America the Beautiful as a theme.

Flag definitives issued in 1981 celebrated the song with “…for amber waves of grain” inscribed on an 18¢ sheet stamp showing a harvester in a grain field,
“…from sea to shining sea” on an 18¢ coil stamp depicting a lighthouse and coastline, and “…for purple mountain majesties” on an 18¢ booklet stamp featuring purple mountains.

That older booklet stamp, by the way, shows part of the Grand Teton mountain range near Jackson Hole, Wyo., according to the 1981 Postal Service philatelic release No. 22.

It is widely claimed that when Bates wrote about purple mountains, she had in mind Pikes Peak in Colorado Springs, which she had recently visited.

When the Flags of our Nation commemorative coil series was issued from 2008 to 2012, the U.S. flags interspersed with the state and territorial flag stamps in each coil roll featured background images again matching up with the song lyrics, including spacious skies (Scott 4273), amber waves of grain (4302), purple mountains (4303) and fruited plain (4332).

The Postal Service provided background details about the writing of America the Beautiful:

“First published as a poem on July 4, 1895, America the Beautiful was written by poet Katharine Lee Bates (1859-1929) and set to the music of Materna, a melody composed by Samuel Augustus Ward (1848-1903). Considered by many to be our unofficial national anthem, the song consists of four verses, each punctuated by the anthemic cry ‘America! America!’ Today it remains one of the country’s most popular patriotic songs.”

Bates was born in Massachusetts and became an English professor at Wellesley College, and eventually the head of its English department.

She revised her original poem in 1904 and again in 1913. It was joined with Ward’s melody early on, though according to the Library of Congress, Bates’ lyrics were occasionally sung to the tune of Auld Lang Syne.

“When the National Federation of Music Clubs sponsored a 1926 contest to elicit new music for Bates’ poem but failed to find a winner, Ward’s music prevailed,” the Library of Congress reports.

The Postal Service has created two pictorial postmarks for first-day covers franked with the new stamps. A black postmark features a single scenic view, while the color postmark is a composite of five views representative of the stamps and the song.

The Postal Service has not disclosed plans for its own prepared FDCs or press sheets. That information has not been provided for recent issues until after the issue date is past. It is presumed but unconfirmed that FDCs and press sheets will be offered for the O Beautiful issue.

Ashton Potter (USA) Ltd. is printing and processing 60 million stamps, a fairly large order for what will likely be a popular commemorative set.