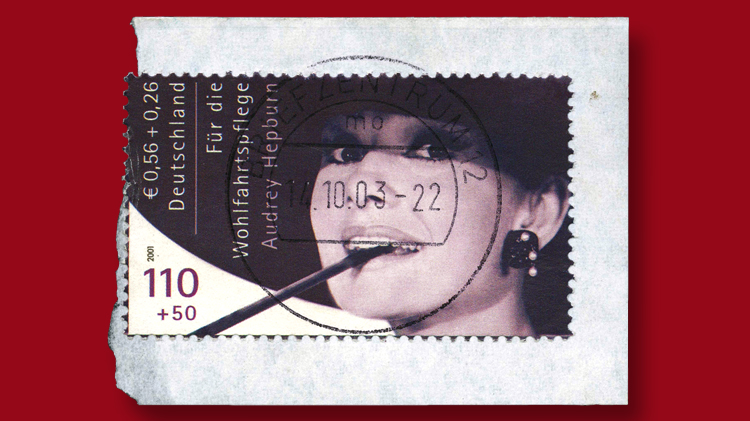 When family members objected to the design of this Audrey Hepburn semipostal prepared by German postal authorities, the stamp was never issued, but examples have been discovered. Ulrich Felzmann will auction this on-piece used stamp July 5-7.

The Ulrich Felzmann auction house in Duesseldorf, Germany, has scheduled its next public stamp and postal history auction for July 5-7.

The auction will offer material from Germany and worldwide, including international airmail and zeppelin mail that will open the auction beginning at 10 a.m. local time Thursday, and a full slate of collections and accumulations that will be presented on Saturday.

Among the German material is a modern rarity that was not officially issued, but which has captured the interest of many collectors of German stamps.

The 110-pfennig+50pf Audrey Hepburn semipostal was intended as part of the five-stamp semipostal set that was issued Oct. 11, 2001 (Scott B890-B891). Offered with a surtax that benefitted the Federal Association of Volunteer Welfare Work, the individual stamps in the issued set honor actors Marilyn Monroe, Charlie Chaplin, Greta Garbo and Jean Gabin, with one additional stamp depicting a film reel.

Permission to use the image of Audrey Hepburn on one stamp was reportedly withheld by Hepburn’s family because it pictured her with a cigarette holder in her mouth. Though the printed stamps were withdrawn from the set before it was issued, a very small number reached the public. In 2010 the Hepburn estate agreed to auction a single mint pane of 10 to benefit charity.

The Felzmann auction is offering what it calls the sensational first find of the unissued stamp, used on piece and postmarked 14.10.03 (Oct. 14, 2003) from the Berlin-area Briefzentrum 12. The same stamp is used as an illustration in the Michel Deutschland-Spezial 2018 stamp catalog, which assigns a value for the stamp used at €100,000 (approximately $117,000 in mid-June).

A different example of the Hepburn semipostal is pictured but not listed in the 2018 Scott Standard Postage Stamp Catalogue, which notes “Four of the stamps have been found used on German mail. Value, $150,000.”

Felzmann has assigned an opening bid of €50,000 on this example, which the auction firm calculated as equivalent to $58,820.

Another unissued European rarity is being offered as part of the same Felzmann auction series.

Austria designed, printed and processed a small number of stamps in 2005 for the 70th birthday of the Dalai Lama. A note in the Scott Standard catalog states: “A €1.28 stamp picturing the Dalai Lama exists. Advance complimentary examples were sent out before the issue was canceled. It is believed approximately 30 examples are extant.”

The item offered by Felzmann is an intact pane of 10 of the unissued stamp with minor creasing in the margin. Felzmann has set a starting price of €4,000 ($4,706) for the pane.

The three-day Felzmann auction also offers a great many issued stamps, including a used example of the United States 1860 90¢ blue George Washington stamp (Scott 39) struck with a red grid cancel. The stamp is accompanied by a 2003 certificate from the American Philatelic Society expert committee identifying it as genuine in all respects.

The 2018 Scott Specialized Catalogue of United States Stamps and Covers lists the used 90¢ stamp with a value of $10,000, with that figure appearing in italics to identify it as an item that can be a challenge to value accurately. Felzmann offers the stamp with a starting price of €3,000 ($3,530).

Illustrated catalogs for the Felzmann auctions can be viewed here, with online bidding options available.