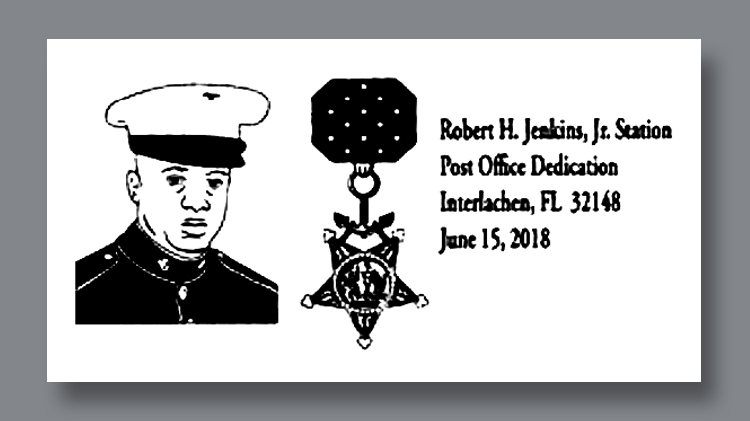 Robert H. Jenkins was posthumously awarded the Medal of Honor on April 20, 1970. A postal facility was recently named after Jenkins.

A pictorial postmark has been dedicated to Pfc. Robert H. Jenkins Jr., a Marine who was killed in action while saving a colleague’s life during the Vietnam War. He was 20 years old.

The postmark includes Jenkins’ image and the Medal of Honor, which was awarded to him posthumously on April 20, 1970, for his act of bravery.

According to the Congressional Medal of Honor Foundation’s website, the Medal of Honor is “the highest award for valor in action against an enemy force which can be bestowed upon an individual serving in the Armed Services of the United States.” Only 3,498 recipients have received the accolade since its inception in 1861. Jenkins is one of 89 African-Americans granted the distinction.

President Richard M. Nixon’s Medal of Honor citation tells the story of Jenkins’ bravery when his team was attacked by a North Vietnamese army platoon on March 5, 1969.

“Reacting instantly, Private First Class Jenkins and another Marine quickly moved into a two-man fighting emplacement, and as they boldly delivered accurate machine gun fire against the enemy, a North Vietnamese soldier threw a hand grenade into the friendly emplacement,” the citation states. “Fully realizing the inevitable results of his action, Private First Class Jenkins quickly seized his comrade, and pushing the man to the ground, he leaped on top of the Marine to shield him from the explosion … He gallantly gave his life for his country.”

Jenkins was born June 1, 1948, in Interlachen, Fla. He is buried at Sister Spring Baptist Cemetery in his hometown. Other honors bestowed upon him include the Purple Heart, the Combat Action Ribbon and the National Defense Service Medal.

On March 23, President Trump signed into law H.R. 3893, “which designates a facility of the United States Postal Service as the Robert H. Jenkins, Jr. Post Office.”