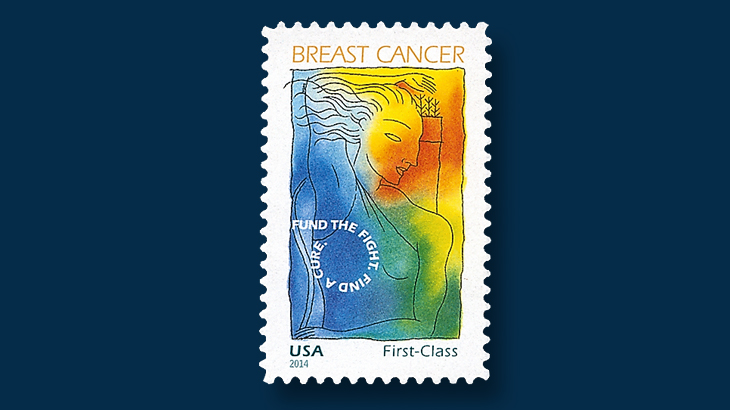 The United States Breast Cancer Research semipostal stamp was first issued in 1998. The stamp recently was credited with funding a major cancer study.

In a June interview with the Associated Press, Brawley said the Breast Cancer Research semipostal stamp helped fund a major cancer study that may mean fewer women with breast cancer will have to undergo chemotherapy to treat their disease.

“Finding the money to do this was very, very difficult,” the doctor told the AP. “They really had to pass the hat around.”

With the help of several foundations, the National Cancer Institute sponsored the study. Money from the surcharge on the semipostal stamps provided “a key part” of the institute’s initial funding, the AP said.

First issued in 1998, the Breast Cancer Research semipostal stamp (Scott B1) initially sold for 40¢ including a 6¢ surcharge that went to the National Cancer Institute and Defense Department for cancer research projects.

Since then the stamp, which remains on sale, has raised about $86 million dollars for cancer research, according to the U.S. Postal Service.

“I think it’s been well spent,” said Dinah Singer, who has been involved in the use of the stamp’s proceeds. Singer is director of the Division of Cancer Biology at the National Cancer Institute.

Charities continue to use stamps on reply envelopes to encourage donations