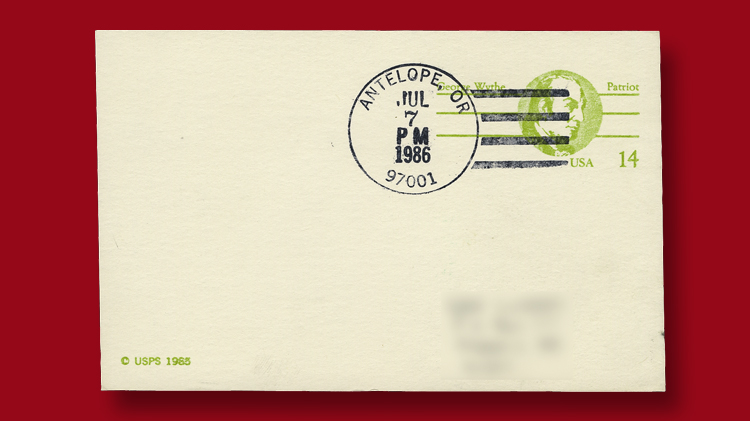 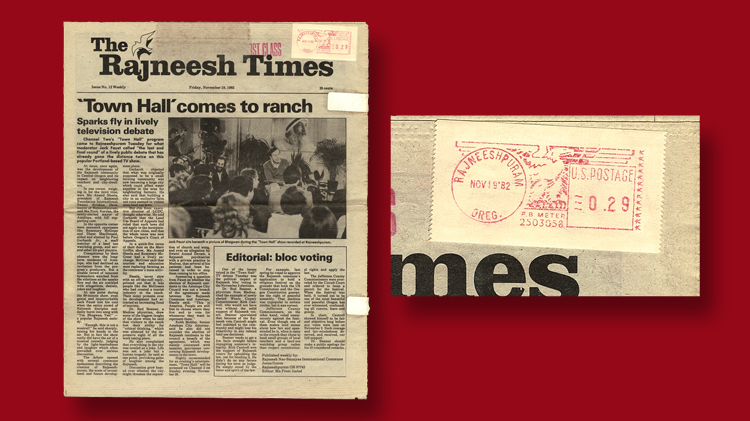 This Rajneesh Times newspaper was mailed in November 1982. A close-up of the postal meter reading Rajneeshpuram, Ore., also is pictured here.
Previous
Next

As I was flipping through television channels recently, I landed on a rerun of Forensic Files, a documentary-style series that shows the “science behind the crime.” The small town of Antelope, Ore., was described early in the episode (“Bio-Attack,” 2002), and its tiny post office was shown.

I was intrigued enough to continue watching. The narrator explained how in the early 1980s a controversial cult leader built a small city in the Oregon desert near Antelope, a town of approximately 90 people.

As the episode progressed, it showed how the followers of Bhagwan Shree Rajneesh (1931-90) took over the town of Antelope and renamed it Rajneeshpuram.

As I continued watching this true tale of bioterrorism and attempts to overthrow local governments, I wanted to learn more and wondered if any postal history items related to that post office were still available.

Afterward, with relative ease, I was able to find a postcard postmarked in Antelope. The United States Postal Service never formally changed the name of the town, but postmarks exist of Rajneeshpuram. I’m hoping to learn more about the history of the two post offices.

I also found a newspaper produced by the Rajneesh community that was mailed with a meter strip with the Rajneeshpuram name. A small article inside the paper said that the town “was allocated its own zip code this week by the US Postal Service. The new zip code is OR 97743. Until now the city has been temporarily using the Madras code.”

Digging further into the story of the Rajneesh, I discovered a Netflix original documentary Wild Wild Country that was released in March. It is six hours long, split into six episodes. I highly recommend it to anyone who wants to learn more about this bizarre moment in U.S. history.