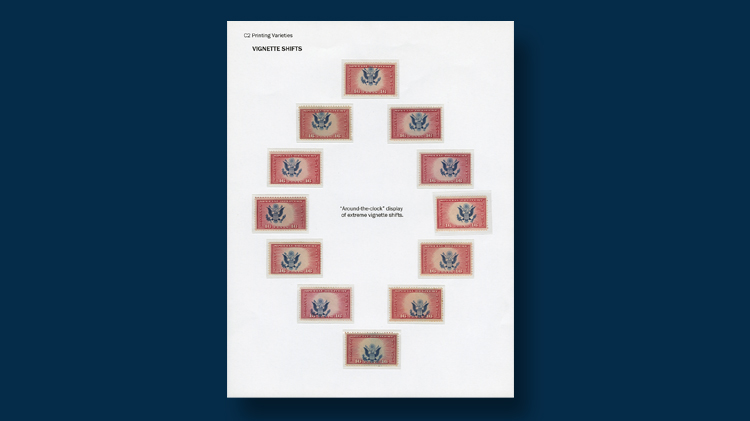 Featured in the center of the 1936 16¢ airmail special delivery stamp is the Great Seal of the United States. Here the bald eagle from the seal is badly misregistered on the red frame of the stamp in every possible direction. The page is from the collecti 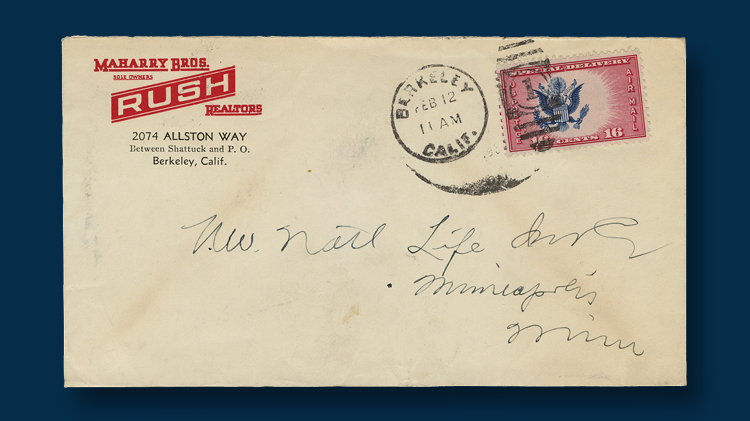 If significant misregistrations of the 16¢ airmail special delivery stamp are hard to find, examples on cover are as rare as hen’s teeth. The best cover I have seen is this one, also from the Yokota collection, with a leftward shift of the eagle.
Previous
Next

In previous U.S. Stamp Notes columns, I have discussed color misregistrations that can be found on dollar-value stamps of the 1938 Presidential issue and on the 1931 2¢ Red Cross stamps. These are common stamps, and misregistrations between the two colors that make up the designs are not difficult to find.

Featuring the Great Seal of the United States, the stamps were printed in two separate runs through the press: one for the red frame and one for the blue vignette.

Significant misalignments between the red and blue prints are not common among the 72.5 million stamps produced.

What is usually seen are misalignments of 2 to 3 millimeters. Misregistrations of more than that are quite scarce. However, over many years of collecting this issue, Hideo Yokota put together an “around the clock” display of major misregistrations. Most of these misregistrations are in the range of 4.5mm.

If these misregistrations are difficult to find as individual mint or used stamps, they are doubly so on covers. The best example I’ve seen is also credited to Yokota’s searching. It is the leftward vignette shift on a cover sent from Berkeley, Calif., to Minnesota.