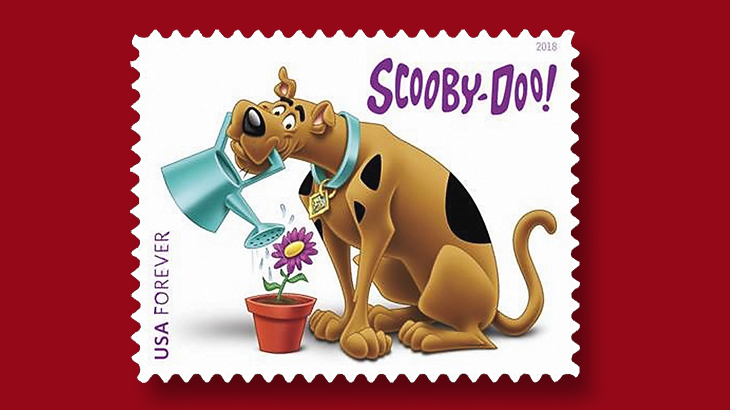 The popular cartoon character Scooby-Doo will make his debut on a United States forever stamp July 14. The new stamp is being offered in association with a new social responsibility program named Scooby-Doo Doo Good.

Cartoon canine Scooby-Doo will appear on a single nondenominated (50¢) forever commemorative stamp that will be issued July 14 with a ceremony at the Mall of America in Bloomington, Minn.

“This new issuance is a 12-stamp sheet featuring Scooby-Doo helping out by watering a blossoming plant in a flowerpot — a simple act symbolizing a component of the ‘Doo Good’ campaign’s effort to provide young people with tools and activities geared toward enriching the environment,” the Postal Service said.

“The campaign, launching this year in partnership with generationOn, the youth division of Points of Light, also focuses on helping the hungry and acting as animal allies.”

The stamp is being issued in collaboration with Warner Bros. Consumer Products.

“The lovable, iconic Great Dane Scooby-Doo has solved mystery after spooky mystery since his 1969 debut,” the Postal Service said.