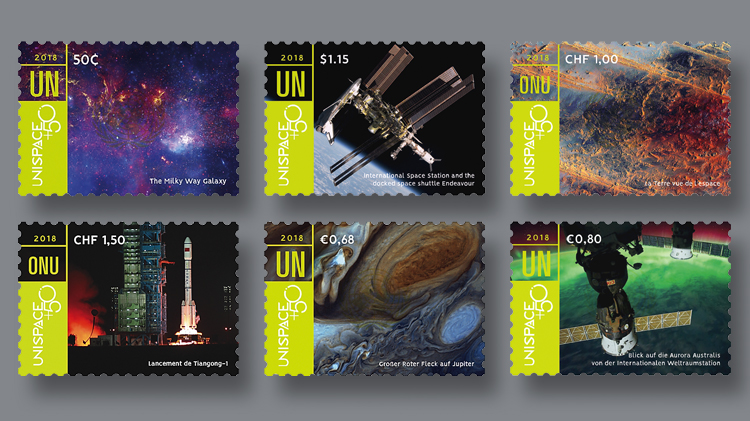 Six stamps from the United Nations Postal Administration commemorate UNISPACE+50 and the more than 50 years of international cooperation in the peaceful uses of outer space. The stamp designs feature the UNISPACE+50 logo and photographic images of outer s 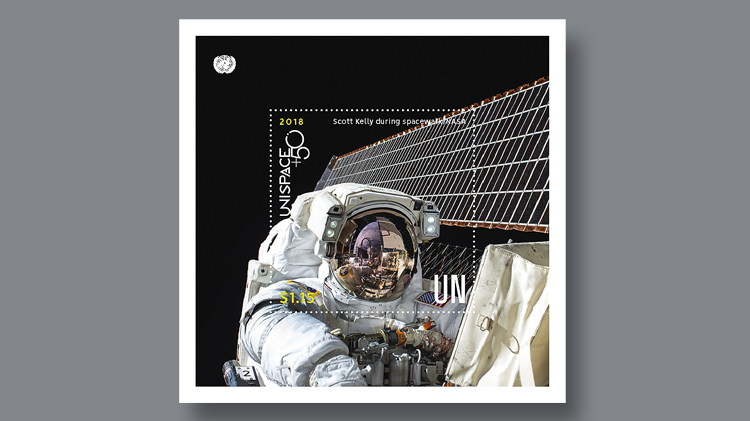 American astronaut Scott Kelly is shown during a spacewalk on the $1.15 souvenir sheet of one stamp from the United Nations Postal Administration. 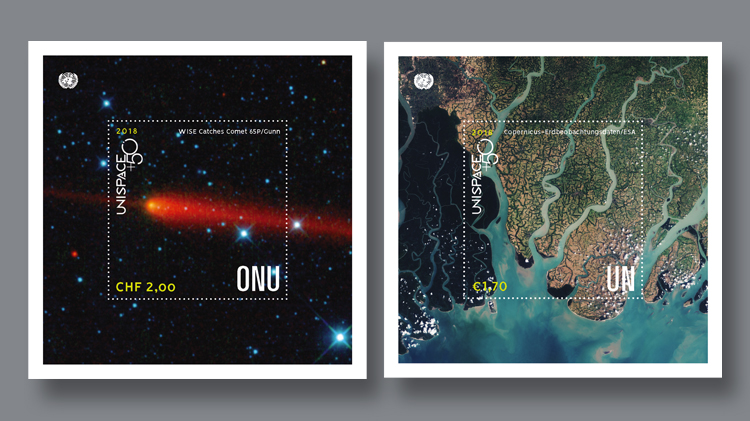 The other two United Nations souvenir sheets of one stamp each in the UNISPACE+50 issue depict the comet 65P/Gunn and an image of Earth from a Copernicus Sentinel satellite. A total of 22,000 and 27,000 sheets respectively, were printed.
Previous
Next

The stamp set honors UNISPACE+50, a 50th anniversary celebration of the first United Nations Conference on the Exploration and Peaceful Uses of Outer Space.

“This special event aligns not only with the ever-growing importance of space applications and technologies for humankind, but also with global efforts, goals and targets to end poverty, protect the planet and ensure prosperity for all, particularly under the 2030 Agenda for Sustainable Development,” the UNPA’s philatelic bulletin Fascination stated.

According to the website of the United Nations Office for Outer Space Affairs, UNISPACE+50 has two main parts: a symposium aimed at the broader space community on June 18-19; and a special high-level segment of the 61st session of the Committee on the Peaceful Uses of Outer Space (COPUOS) June 20-21. The events take place at the Vienna International Centre in Vienna, Austria.

Panel discussions topics at the symposium include space and women, space and industry, and space and youth. In addition, a UNISPACE+50 exhibition is taking place June 18-23.

Sergio Baradat of the United Nations designed the stamps. UNPA described the designs as including “images of human space flight and space technology, Earth observation images, space exploration, and studies of space.”

The stamps for use from the post office at U.N. headquarters in New York City feature NASA images of the Milky Way galaxy on the 50¢ denomination, and the International Space Station and the docked space shuttle Endeavour on the $1.15.

The souvenir sheet, also denominated $1.15, is the only item in the set to feature a person — a NASA image of Scott Kelly during a spacewalk. Kelly, also a retired U.S. Navy captain, spent nearly a year on the International Space Station (March 2015 to March 2016) seeking to understand how the human body can cope during lengthy periods in space.

The stamps for use from the U.N. post office at the Palais des Nations in Geneva, Switzerland, show a view from space on the 1-franc denomination, and the launch of Tiangong-1 on the 1.50fr. The latter is China’s first space station module; it was launched in 2011 and fell back to Earth in April 2018.

The 2fr souvenir sheet depicts an image of the 65P/Gunn comet (named after professor James E. Gunn of Princeton University, who discovered the comet in 1970) taken from NASA’s Wide-field Infrared Survey Explorer, also known as WISE.

The stamps for use from the post office at the Vienna International Center feature a photo of Jupiter’s Great Red Spot on the €0.68, and a photo of the aurora australis (also known as the southern lights) from the International Space Station on the €0.80. The red spot on Jupiter is a massive storm that has been swirling the planet for more than 150 years, according to NASA.

The souvenir sheet contains a €1.70 stamp with a European Space Agency image of Earth taken from a Copernicus Sentinel satellite.

Each stamp includes the UNISPACE+50 logo.

For more information about the United Nations Office for Outer Space and UNISPACE+50, visit www.unoosa.org.