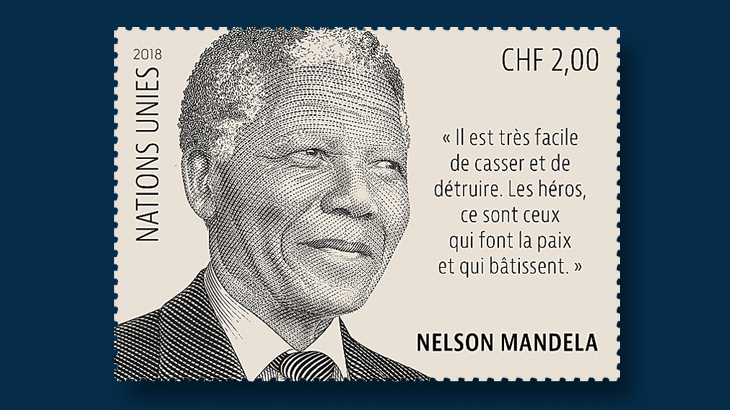 Not only is July 18 Mandela’s birthday, it also is Nelson Mandela International Day. In 2009, the U.N. General Assembly established this day in recognition of his contributions to the culture of peace and freedom.

In 2015, the U.N. General Assembly extend the scope of Nelson Mandela International Day “to also be utilized in order to promote humane conditions of imprisonment, to raise awareness about prisoners being a continuous part of society and to value the work of prison staff as a social service of particular importance,” according to the website www.un.org/en/events/mandeladay.

It is also a day of public service and activism; the Nelson Mandela Foundation is dedicating this year’s Mandela day to “action against poverty.”

The new 2-franc Nelson Mandela stamp is for use from the U.N. post office at the Palais des Nations in Geneva, Switzerland. Although it is being issued on Mandela’s 100th birth anniversary and in conjunction with Nelson Mandela International Day, the UNPA is classifying this stamp as a definitive.

Designed by the Swedish-born artist and stamp engraver Martin Morck, the stamp features an engraved-style portrait of Mandela and a quote in French. The quote translates to “It is easy to break down and destroy. The heroes are those who make peace and build.”

According to the Nelson Mandela Foundation, the quote is from a July 2008 speech in Kliptown, Soweto.

Lowe-Martin Group of Canada printed the stamp in sheets of 20. The UNPA describes the printing process as “offset lithography-duotone.”

In an article about duotone color on the Design Shack website (www.designshack.net), Carrie Cousins wrote: “Duotone prints are made in two shades of the same color or with black and one tint. The process uses two color plates made with the screen set at different angles.”