World War I forever stamp to be issued at Kansas City, Mo. museum 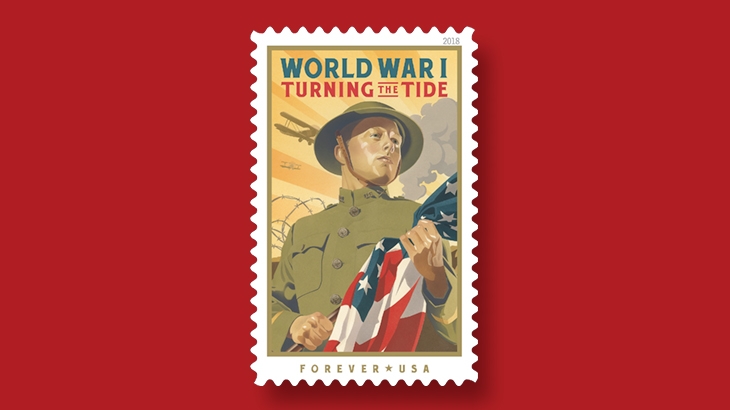 The forever stamp commemorating America’s contribution to World War I will be issued July 27.

The United States nondenominated (50¢) forever stamp commemorating the American sacrifices in the first World War will be issued at the National World War I Museum and Memorial in Kansas City, Mo.

The first-day ceremony for the World War I Turning the Tide stamp will take place July 27 at 11:30 a.m. at the museum on 2 Memorial Drive.

The U.S. Postal Service advises that tickets are limited for this event, but as of early June had not revealed how tickets can be obtained.

“World War I was a devastating four-year global conflict (1914-1918) that reshaped the map of Europe,” the Postal Service noted in its announcement about the upcoming ceremony.

“The United States remained neutral in the war until April 1917, when the nation declared war on Germany and entered on the side of the Allies — Britain, France and Russia.”

With barbed wire behind him and a biplane in flight overhead, a uniformed American soldier in the stamp design clutches an American flag as the war rages.

The design is captioned in two lines above the illustration: “World War I” and “Turning the Tide.”