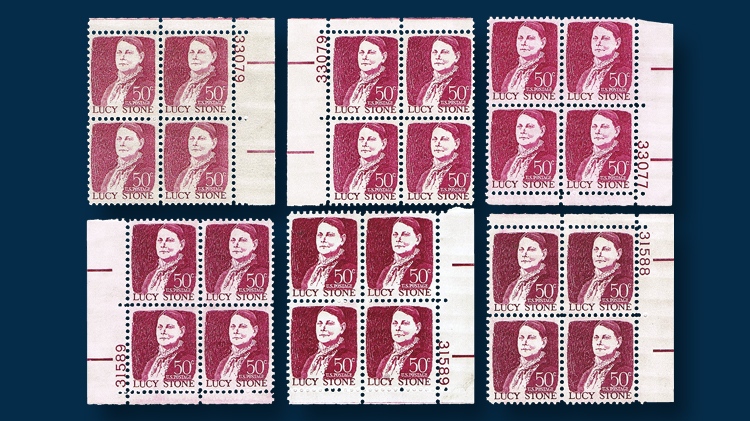 Note the six different shades of these United States 50¢ Lucy Stone plate blocks from the Prominent Americans issue first released in the mid 1960s. Are they significant enough to warrant a Scott catalog listing? The author says no, and explains why in th 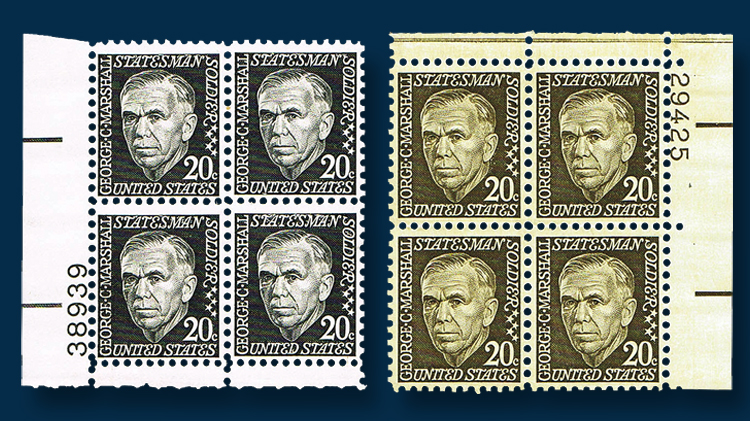 The black olive version of the 20¢ George Marshall stamp, at top, does have a Scott listing, based on its significant difference from the original deep olive caused by an ink change.
Previous
Next

A question from Linn’s reader Greg Waldecker raised an issue I have not seen addressed in the literature.

He said: “I’ve had a single of Scott 1293a [The 50¢ tagged Lucy Stone stamp, issued in April 1973] for years; wondering if it was a different color or just a color changeling. I’ve held on to it hoping to find another of the same color.

“Well, I have, and it’s a plate block this time. This came from a collection where it had resided for three decades in a glassine with other, normal-color untagged 50¢ plate blocks. The color of the paper of the blocks is the same to the naked eye, while under ultraviolet light, the tagged block is just a bit whiter. The gum on both blocks is shiny. Here are two questions:

“(1) Is this a color which tends to be a changeling?

“(2) Is it possible this could be a transition color if one of the inks used to print it had run out? While I think it is a pretty significant color difference, though I imagine it may have still been within tolerances for the Bureau of Engraving and Printing to put into the system.”

Let’s start with easy answers: This is not a stamp where we see a lot of color changelings. I can’t rule it out, but it is not a routine problem. Also, because only one color was used to print this stamp, it is not likely to be the result of transition between two differently formulated colors. The different color intensities in the stamp design are the result of use of white space and the differing depth of the incised lines that carried the ink in the intaglio plates.

There are no color varieties listed for this stamp in the 2018 Scott Specialized Catalogue of United States Stamps and Covers — not for the untagged version issued in August 1968, or for the tagged version of 1973. There isn’t even a difference in color listed for these two types; both are described as “rose magenta.”

I look at questions like this from the perspective of an expertizer trying to make a determination as to whether a stamp presented meets the qualifications justifying a catalog listing as a major variety or error. A large number of U.S. stamps found with significant color differences don’t receive catalog listings, and there are a multitude of possible reasons for color varieties.

The standard for achieving a catalog listing has changed over the years. Look at early U.S. stamp listings, and you will see that almost every issue has multiple color varieties listed. As time passed, the number of color varieties listed for stamps declined, partially the result of advances in the consistency of ink-making and partially the result of more stringent qualifications for listing.

Today, a color variety is only listed if there is evidence that a stamp has been printed with ink meant for another stamp, or that a new batch of ink for a given stamp has undergone a change in its formulation that results in a totally differentiable color. This does not happen often.

A search of my clipping files and the online index of the The United States Specialist, the journal of the United States Stamp Society, revealed nothing about the 50¢ Lucy Stone’s ink colors. However, there is excellent coverage on two other stamps from the Prominent Americans series — the 2¢ stamp Frank Lloyd Wright and the 20¢ George C. Marshall — in an article by Charles S. Goodman. Titled “Ink and Color Changes on 2¢ and 20¢ Prominent Americans Stamps,” Goodman’s article was published in the November 1989 The United States Specialist.

Before we get to that article, let’s take a look at the six Lucy Stone plate blocks pictured on page 6. They show a considerable range of colors affecting hue, brightness and intensity.

All six are shiny gum, because there were no dull gum Lucy Stone stamps. They are all tagged, though the quality and intensity of tagging varies.

The examples from later printings — the three different hues in the top row — are softer, relatively flat and lighter than the three blocks in the bottom row. Those have a darker hue and are harsher in appearance. These three hues also seem to stand off the paper better.

These six blocks display the range of distinct colors I found in my accumulation of 28 50¢ tagged plate blocks. A larger group including untagged blocks might yield additional differentiable hues. Tagged Lucy Stone stamps were not replaced as the 50¢ stamp in inventory until issuance of the 50¢ Adm. Chester Nimitz Great Americans definitive on Feb. 22, 1985.

This means that the Lucy Stone stamps were produced over the course of 12 years, during which paper supplier contracts are likely to have changed, the tagging components may have changed, and the ink components may have been altered. This is where Goodman’s The United States Specialist article is helpful. It presents a letter that the he received from the Bureau of Engraving and Printing that discusses the differing colors that can be found on the 2¢ and 20¢ stamps of the Prominent Americans series, circumstances that were likely in play also with the 50¢.

Here are excerpts from that letter: “Since the original printing of the 2¢ Frank Lloyd Wright postage stamp, issued in 1966, there have been several ink formula changes. A blue and black pigment change was made in 1971: Alkali Blue was substituted for Victoria Blue, and magnetic Black Iron Oxide was substituted for Furnace Black, a form of carbon black. This change resulted in easier processing during ink manufacturing. A change in extender was made, circa 1975, when polyvinyl chloride was replaced by calcium carbonate to comply with EPA and OSHA regulations, which addressed the presence of vinyl chloride monomer in polymerized polyvinyl chloride.”

“The changes in formulations do not necessarily account for the range of color variations exhibited by the submitted stamps. Because Black Iron Oxide was substituted for Furnace Black, it is possible for sedimentation to occur in a stored container of postage stamp ink. Black Iron Oxide, having a high specific gravity/density and tending to agglomerate, settles faster in postage stamp inks which have low viscosity. If this ink is not mixed shortly before use, a portion of the top layer has a high probability of being blue …”

“The 20¢ George C. Marshall postage stamps were printed with ink containing Molybdated Chrome Orange and Chrome Yellow pigments. These pigments, which had been widely used in the printing industry, are insoluble lead compounds. BEP subsequently developed lead free inks, circa 1981, to comply with EPA and OSHA regulations concerning the use of lead containing material. The new formulations used lead-free pigments which are difficult to provide a good color match with the original formulation.”

Add to these kinds of problems the possible effects of slight differences in the amount of ink deposited on the plate, and/or transferred from the plate to the paper, and possible differences over time in the coating and consistency of the paper itself. The result is that some difference in visual perception of color is just about guaranteed.

Are any of the 50¢ color varieties worth noting in the Scott U.S. Specialized? Based on concurrent practice, I would say no. There are no color varieties listed for the 2¢, and the major reason for listing one color variety, “olive black” for the 20¢ is that it is a major difference, and associated only with dull gum.

It can be argued that any collectible variety should be listed in the catalog, but that creates a whole host of problems, from catalog size, to the staff needed to pin down all the possible varieties (not just color varieties) and determine how they should be valued. All of that would add significantly to the retail cost of the catalog.

For those readers who enjoy U.S. philately, I highly recommend that you join the United States Stamp Society to receive its excellent monthly journal and participate in its study groups. More information is available from the society’s website, or by writing to the Executive Secretary, Box 3508, Joliet, IL 60434.