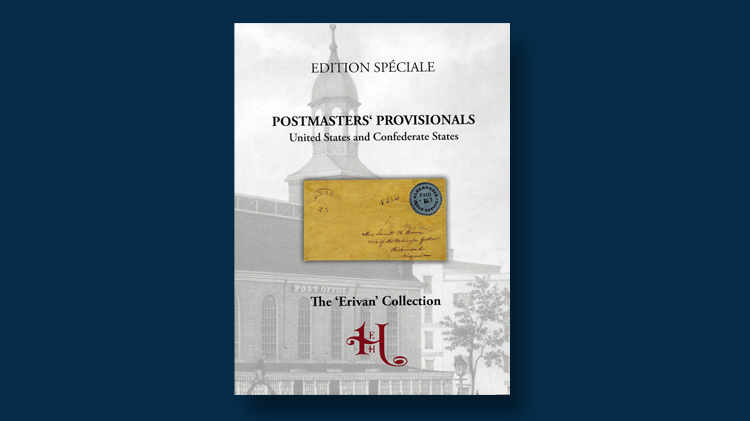 "Postmasters’ Provisionals, United States and Confederate States," a 170-page hardcover “edition speciale” book from the Global Philatelic Network. The cover of the book pictures the Alexandria “Blue Boy,” the famous cover franked with the unique 1846 5¢

Born in Wiesbaden, Germany, in 1932, Mr. Haub studied economics at the University of Hamburg and eventually became the sole managing partner of Tengelmann Group, then one of the largest retail food chains in the world.

He transferred control of the company to two sons in 2000 but served on the board until retiring in 2013.

The cover of the book pictures the Alexandria “Blue Boy,” the famous cover franked with the unique 1846 5¢ black on blue Alexandria, Va., postmaster’s provisional stamp (Scott 1X2), one of the most highly valued items in all of American philately.

“His love of philately was sparked at a very young age by his mother, who gave her son letters she received from around the globe,” according to the H.R. Harmer auction firm.

“Stamp collecting has remained a part of his life ever since. Mr. Haub has a number of fine collections, including world-class material from Canada and Germany.”

Mr. Haub traveled to the United States in 1952 and worked in retail businesses before returning to Germany to complete his schooling. Stamps took a back seat to his growing family and the demands of his business responsibilities, but when he found he was able to return to active collecting, he did so with enthusiasm.

However, Mr. Haub never sought to exhibit his collections. When Postmasters’ Provisionals, United States and Confederate States was published, he acknowledged that many items pictured therein had not been seen publicly for years or even decades.

That changed in 2016, when many of Mr. Haub’s magnificent rarities were displayed in the court of honor at World Stamp Show-NY 2016. At the same time, H.R. Harmer conducted the successful Erivan collection auction at the Javits Center.

Sharing a love of art and philanthropy, Mr. Haub and his wife of 60 years, Helga (also an accomplished philatelist, who survives him), found themselves at home in the American West as owners of a Wyoming buffalo ranch.