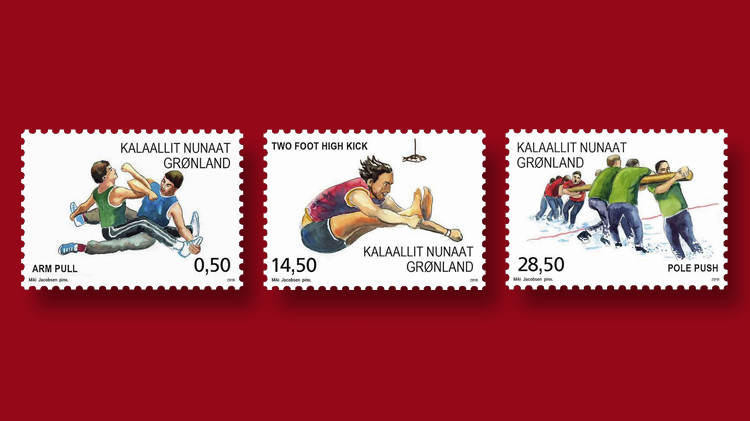 The final set of three stamps in the Sports in Greenland series show some of the traditional competitions in the Dene Games: the arm pull, two foot high kick and the pole push.

The stamps in these two sets were issued in individual sheets of 40 and in a souvenir sheet with the three different designs se-tenant (side-by-side).

The new stamps also were issued in a souvenir sheet of three, but the size of the individual sheets has been reduced from 40 to 10 stamps. Post Greenland has reported that it plans to issue all future stamps in sheets of 10 as well.

The three new stamps focus on traditional sports of the Dene Games.

Greenland hosted the 2016 Dene Games, also known as the Arctic Winter Games. This year’s competition is taking place March 18-24 in Hay River and Fort Smith of the South Slave Region of the Northwest Territories in Canada. Six teams, including Greenland, will compete in a variety of sports, ranging from traditional Arctic events to badminton.

Greenland Post said: “Survival in ‘the old world’ required large amounts of mental and physical strength, just like sports do today. As the long winter months were a time of raging snow storms, people invented games and sports’ disciplines. The purpose of many of these games was not just entertainment, but physical challenge. Precision, strength and endurance were some of the characteristics in which people would compete.”

Greenland artist, actor and stamp designer Miki Jacobsen designed all of the stamps in the series.